You are here: Home / video / Everybody Loves The Crazy Nastyass Honey Badger

Are you familiar with the Honey Badger? There is no other animal in the animal kingdom that is as fearless and crazyass as the Honey Badger. These little fearless mammals look like a fat skunk and will do anything for food. Nasty as hell, it eats practically whatever it wants including getting bit by poison snakes and tunneling inside giant bee nests.

Are you familiar with the Honey Badger? There is no other creature in the animal kingdom that is as fearless and crazyass as the Honey Badger. These little mammals look like a fat skunk and are nasty as hell. They’ll eat whatever they want even if it means getting bit by poison snakes or thousands of bees. Honey Badgers are just amazing on their own. But what happens when “Randell” does a funny voice over of some National Geographic footage? It turns into a Meme. Enjoy!

If you want to save this clip off YouTube, then check out this tutorial: How to Copy Files Off YouTube and Convert them for your Video iPod, Apple TV, iTunes or iPhone

Huge thanks to @msheidijo1111 for transcribing the video for MethodShop. Please follow her on Twitter as a thank you: 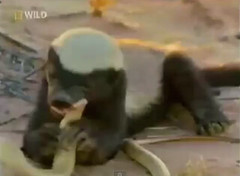 This is the honey badger. Watch it run in slow motion. It’s pretty bad-ass. Look, it runs all over the place. “Woah, watch out!” says that bird. Ew it’s got a snake? Oh, it’s chasing a jackal? Oh my gosh! Oh the honey badgers are just crazy! The honey badger’s been referred to by the Guinness Book of World Records as the most fearless animal in all the animal kingdom. It really doesn’t give a shit. If it’s hungry, it’s hungr-ew what’s that in its mouth! Oh it’s got a cobra? Oh it runs backwards? Now watch this, look, a snake’s up in a tree. Honey badger don’t care. Honey badger don’t give a shit, it just takes what it wants. Whenever it’s hungry it just- ew! And it eats the snakes. Oh my God watch it dig. Look at that digging. The honey badgers really pretty bad-ass. They have no regard for any other animal whatsoever. Look at him just grunting and- ew! Eating snakes! Ew what’s that, a mouse? Oh that’s nasty. Oh, they’re so nasty! Oo look! It’s chasing things, and eating them.

The honey badgers have a fairly long body, but a distinctly thick set, broad shoulders, and you know, their, their skin is loose, allowing them to move about freely, and they twist around. Now look, here’s a house full of bees. You think the honey badger cares? It doesn’t give a shit. It goes right in to the house to bees to get some larvae. How disgusting is that? It eats larvae. Ew, that’s so nasty. But look, the honey badger doesn’t care, it’s getting stung like a thousand times. It doesn’t give a shit, it just, it’s hungry. It doesn’t care about being stung by bees. Nothing can stop the honey badger when it’s hungry. Oh what a crazy fuck! Look! Ew, it’s eating larvae, that’s disgusting. There it is running in slow motion again. See, now what’s interesting is that other, other animals like these birds here the just like to wait around until the honey badgers done eating and then it swoops in to pick up the scraps. It says, “You do all the work for us honey badger and we’ll just eat whatever you find, how’s that? What do you say, stupid?” Look at this bird. “Thanks for the treat, stupid!” “Hey, come back here” says the honey badger. Birds don’t care, and you know what, the jackals do it, too. Look at these little dogs. They’re like, “Thanks, Stupid! Thanks for the mouse! See ya later!” The honey badger does all the work while these other animals just pick up the scraps.

If this video gets taken down, just let us know. We’ll repost it.

Is this the worst Star Trek fight scene… ever?
Next Post: Where is the Internet? [pic] »