You are here: Home / NFL, NBC Plan Kickoff of Free Football on Internet 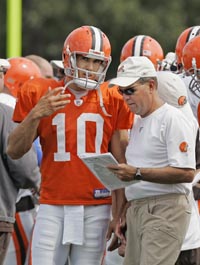 Football fans will soon be able to watch some of the biggest professional games on the Internet.

The National Football League and General Electric Co.’s NBC Sports will announce Monday that they plan to stream on the Web 17 regular-season games, mostly Sunday night matchups — the first time the league has widely distributed complete games live on the Internet in the U.S.

The deal, which kicks off with the season opener on Thursday, Sept. 4, is the biggest step so far by the NFL to wring some value out of the Web. But it is a tentative step, covering only games that air on NBC, excluding the NFL’s 239 other games that air on other networks, including CBS, Fox and ESPN, during the regular season. Nor does it include the league’s playoffs or the Super Bowl, which will air on NBC next year.

The league and NBC say it is an experiment. They hope to prove they can lure new viewers and people who are already watching at home by adding interactive elements. Viewers will be able to choose from among at least four live camera angles and review statistics that update during the game, according to the league. The league and the network will share in ad sales.

“I think the consumer of media is more and more interested in a greater sense of control over their media experience,” said Gary Zenkel, NBC Sports’ executive vice president of strategic partnerships. “Whether that translates to sports viewing or not, no one knows. But this is certainly an opportunity to experiment.”

The move will help the NFL demonstrate how much value there is in the online rights to its games, potentially giving it another bargaining chip when its broadcast deals next come up for negotiation. Several major sports organizations already allow some live games to be shown on the Web. CBS Sports has streamed the National Collegiate Athletic Association’s March Madness basketball tournament. At the Olympics next month, NBC is streaming 25 out of 34 events online. And Major League Baseball has its own Web site, MLB.com, that has created a lucrative business selling subscriptions to MLB.tv, which streams out-of-market games.

The NFL has been slower to embrace the Internet, largely because its national broadcasting contracts with four networks and DirecTV Group Inc. bring in more than $3.7 billion a year, according to people close to the league and networks, far more than revenue other leagues earn. Its Web site, NFL.com, until now has offered an exhaustive supply of information and statistics but it hasn’t streamed complete games online for broad U.S. viewing. It does sell subscriptions to streaming of the games to people overseas.

The NFL owns the online rights for its games but its broadcast TV deals have restricted the league from streaming footage of those games while they are in progress.