This coming this Thursday (tonight) is the season finale of the American version of The Office. Here’s a teaser trailer and 10 things we learned from last week’s episode of The Office.

10. Buffoons (like Andy and Dwight) do not need to wear sumo suits to appear more buffoonish. In fact, the hilariousness of the sumo suit is inversely proportional to how funny the character is in his regular officewear. However … 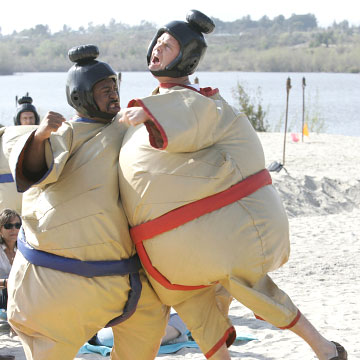 9. The fact that a sumo suit enables Andy to float away on the ebbing tides of Lake Scranton is completely fascinating. How does physics explain this?

8. Michael notes that Lake Scranton is America’s eighth largest indigenous body of water. Ignoring the fact that this is patently false, we’d like to believe he was creating a metaphor for America’s unsustainable reliance on reservoirs and the corresponding danger to the ecosystem. Or a metaphor for being an idiot.

7. Contrary to Michael’s assumptions about Oscar’s beachwear, it’s actually gayer to wear designer jeans to the beach than a Speedo or leather pants.

6. If one employee at Dunder Mifflin could actually win Survivor, it’s Creed. Did you see the two-second shot of him toeing out into the lake and catching a fish with his bare hands? Jeff Probst would be proud. Poor fish. Who knows where those hands have been?

5. Jim is not as good of a boyfriend as we thought. What kind of guy tries to distract his girlfriend while she’s lobbying for a promotion? Then again, why is Karen competing for the same job as her boyfriend? Did we miss something?

4. Pam thinks that she has the most boring job at Dunder Mifflin. We’d give that honor to Stanley … if we knew what Stanley did.

3. No matter what anyone says, we still like Karen better than Pam. Karen goes out and gets what she wants (Jim, a better job, a fake tan). Pam has to walk through a field of burning coals to work up enough outrage to confess her feelings for Jim, and even then, she stops short of saying what she’s really feeling (burning flesh).

2. If you’re going to walk across a field of burning coals, go fast, and remember “The mind has to wrap around the foot.”

1. Not even The Office’s writers are immune to jerking us around during May Sweeps. They hadn’t gone near the Pam-Jim-Karen love triangle for weeks when suddenly, Pam dropped her bombshell (if you can call wanting to be “best friends” with Jim a bombshell). This is all leading up to next week’s season finale, when Michael, Jim, and inexplicably, Karen, head off to New York to compete for the same job. We’ll give two-to-one odds Karen gets the gig, thus putting an end to the ménage tension and taking a little piece of our heart with it.

The season finale of The Office airs on NBC at a special time 8/7c. Don’t forget to double check your TiVos and DVRs.