We love this old photo. It made us wonder if it could be the origional LOLcat and where this whole LOLcat craze started on the Internet? 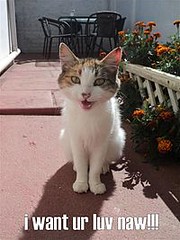 We love this old photo. We wish it was the original LOLcat photo, but that honor goes to British portrait photographer Harry Pointer. According to Wikipedia, somewhere around the 1870s, Pointer created “a carte de visite series featuring felines posed in various situations, to which he added amusing text intended to further enhance their appeal. However, the first recorded use of the term “lolcat” is from the anonymous imageboard, 4chan. The word “Lolcat” is attested as early as June 2006, and the domain name “LOLcats.com” was registered on June 14, 2006.”

So our photo above wasn’t the first LOLcat, but it still makes us laugh. What about you?