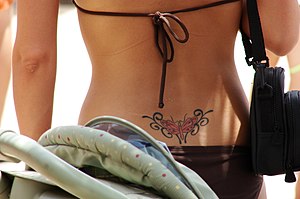 It was only a matter of time before Stephen Colbert successfully convinced linguists that “truthiness” is a real and honorable word to be formally acknowledged. Sure enough, it was recently announced that Colbert’s vocab staple was among some of the new American slang words, including Tramp Stamp (pictured above) to make it to the pages of the latest edition of the Oxford American Dictionary. But “truthiness” already has a history of respect. In 2005 it was named the American Dialect Society‘s Word of the Year, and in 2006, Mirriam-Webster bestowed the same honor. The Oxford definition goes something like this:

“truthiness n. informal the quality of seeming or being felt to be true, even if not necessarily true. – ORIGIN early 19th cent. (in the sense ‘truthfulness’): coined in the modern sense by US humorist Stephen Colbert (1964–).”

There are other, far less predictable, no less profound words now also apart of the (thus far) esteemed OAD. This year’s inductions include:

… need I go on? Fine. There’s also hashtag, BFF, carbon credit, gal pal and vuvuzela. And dozens more. The entire list can be found here. The reader comments on a related CNN post had me LMAO. The “what-is-the-world-coming-to” academic elite are going to have to bear down and accept it. These new American slang words are here to stay.
Related Articles: