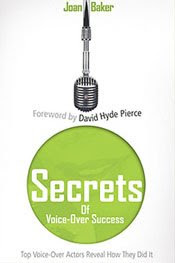 A panel of voice-over actors, talent agents, casting directors, and network television executives will bring their advice and expertise in late March at The Learning Annex to a special crash course in voice-over work that will include a live audition.

Joining the panel will be voice-over actors from such shows as The Simpsons, Law & Order, The Sopranos, and American Idol, as well as the voices behind the Oscars, the Emmys, and the Olympic Games.

Six participants will be chosen to perform a live voice-over audition for the panel.

The discussion will be moderated by Joan Baker, author of the Secrets of Voice-Over Success. Baker’s credits include work on ESPN, all the major networks, HBO, and Showtime.

The voice behind the movie trailers, Don La Fontaine, is scheduled to appear. His credits include more than half a million promotional spots.