You are here: Home / Technology / Apps / 5 Signs That Your MacBook Battery is Dying

5 Signs That Your MacBook Battery is Dying

After a year or so of constant use, your MacBook battery will slowly start to die. I have a 2007 2.33 GHz Intel Core2 Duo MacBook Pro and I’m on my 4th battery so far. Here are 5 things I’ve observed with the death of each battery, including an explosion, and what your battery replacement options are. 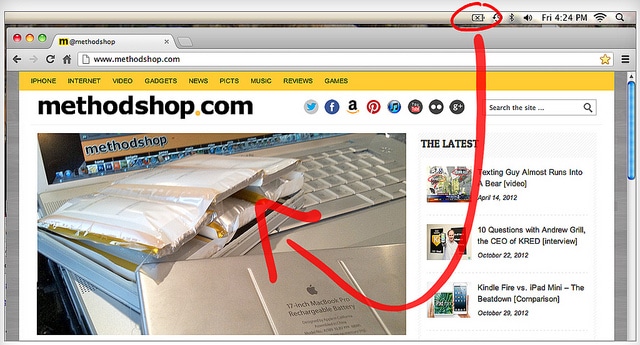 A decrease in battery life is the most obvious sign that your battery isn’t performing at 100% capacity anymore. My 17″ MacBook Pro is big, heavy and usually stays plugged in at home. I try to take an iPad or a smaller laptop with me, like the HP Mini, when I travel. Unfortunately, the first time I noticed a real decrease in the life of my MacBook Pro’s battery was on a plane. During a flight, I pulled out my fully charged MacBook and did a bunch of battery saving tasks, like dimming the screen, killing the WiFi and quitting all unnecessary apps. I would normally get at least a couple of hours out of a full battery, but less than 20 minutes later I was getting low battery alerts. This is a sure sign of future battery trouble and you should start thinking about buying a new battery soon.

If you leave your MacBook plugged in overnight and still see the charge percentage stuck at 99% or lower, then you probably have a battery that’s beginning to fail. If your battery icon has an X, then either your battery isn’t properly mounted or it’s completely dead. Either situation means you should purchase a new battery sooner than later. 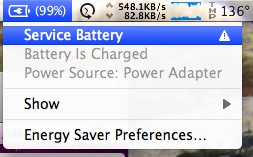 If you click on the battery icon in your menu bar, it will display information on your battery’s condition. This status tells you whether your MacBook’s battery is functioning normally and approximately how much charge it can hold. Here are the 4 possible conditions: 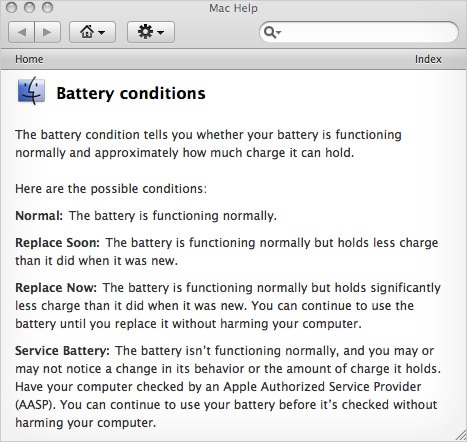 Not to overstate the obvious, but any status other than “Normal” means you need to start looking for a new MacBook battery.

Is your Mac cursor jumping around all over the place, automatically highlighting fields of text or typing in random and unexpected places? This can actually be a sign that your battery is failing. I personally went through this experience and it almost drove me nuts. I spent hours troubleshooting my mouse, trackpad and keyboard until I removed my dying battery and everything went back to normal. To see if your battery is causing erratic cursor behavior, try removing the battery and running your laptop on AC power only. If your cursor behaves normally without the battery in your MacBook, then it’s time to buy a new battery.

The first time my MacBook Pro’s battery started to fail, I ignored all the warning signs above, including the “Service Battery” alert. I just keep my MacBook plugged in and kept working. Bad idea. After a couple months of doing this I noticed the table that my MacBook Pro was on was getting really hot. It was normally hot, but this time was different. I lifted up my laptop and touched the battery to see if it was the source. Oh yeah.

I immediately shutdown my MacBook and took out the battery. About an hour later, the battery blew up. Not “blew up” as in exploded like the Dell laptops in 2006, but blew up like a balloon. The back-plate of the battery cover popped off (see pict below). Was it a 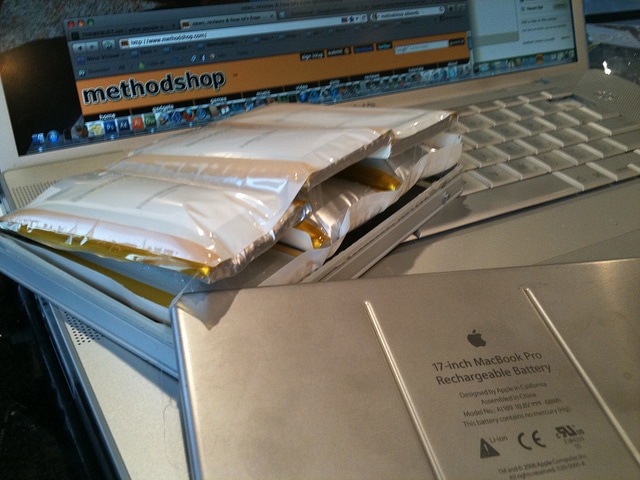 As soon as you start to suspect that your battery is about to die, you should buy a spare. They last thing that you want, is to be in an emergency situation and not have immediate portability from your laptop. That’s the whole point of having a laptop.

The good news is that MacBook batteries are much cheaper these days than they used to be. A new battery used to be well over $150 USD. But now you can easily find one online for $20-$100. Just make sure you buy the right size battery for your MacBook.