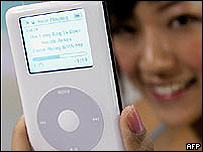 “The founder of Easyjet has confirmed he is entering the online music market in a partnership with UK-based Wippit.

Stelios Haji-Ioannou’s move comes as Microsoft and Yahoo revealed challenges to the likes of established services like Apple’s iTunes and Napster.

Some tracks on Easymusic will cost as little as 25 pence (45 cents).

The launch could trigger a price war, although consumers will face competing standards, with some downloads playing only on certain portable devices.

Apple’s iTunes dominates the market, in part boosted by the phenomenal success of the firm’s iPod portable music player.

But Apple has come under fire this week for charging UK users more than those in France and Germany.” [Via BBC]