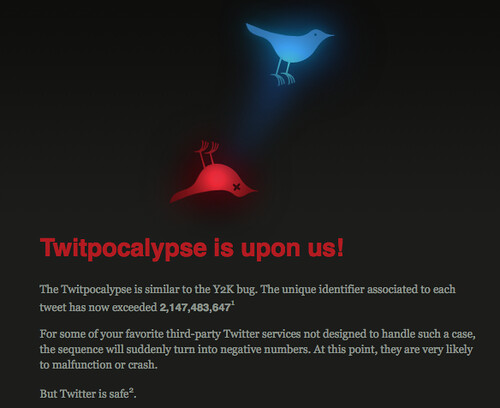 Where were you during the Twitpocalypse? On June 12, 2009 at 23:52:04 GMT, the number of Twitter status updates exceeded 2,147,483,6471, the limit for 32-bit signed integers. This caused many 3rd party Twitter apps to break or start malfunctioning. The developers at WhereCloud even setup Twitpocalypse.com to help track the impending doom many Twitter applications were facing.

June 12th came and went. So what happened? Was the Twitpocalypse over hyped like the Y2K bug? Actually, a lot of Twitter applications did indeed crash and burn. You can track the aftermath of the Twitpocalypse and the current status of your favorite app on Twitter using the #Twitpocalypse hash tag.

The good news is, the world didn’t end and the Twittersphere lives on… it’s just slightly more buggy. As it says on Twitpocalypse.com, “The tweets must flow”!