The Madden Curse LIVES ON!!! 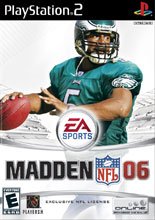 Over six months ago, methodshop.com posted a blog detailing the Madden Curse. The curse is that if you are featured on the box of Madden NFL Football for game systems, you will get injured…badly.

Donovan McNabb became the legengdary game’s latest victim. McNabb just two days ago elected to have surgery to repair his sports hernia and is expected to miss the rest of the season.

The news is just another punch in the face to Eagles‘ fans, who have had a hard enough time dealing with three straight NFC championship losses, a super bowl loss, the loss of T.O., and now the loss of their franchise player, Donovan McNabb…The season, which now finds the team in the cellar of the NFC East is undoubtedly a lost cause, and will have to remain that until next year.