You are here: Home / Uncategorized / Where clean water is a pipedream

Where clean water is a pipedream

If you want a graphic demonstration of the health impacts of poor drinking water, look no further than Zimbabwe.

Three thousand people dead, at least 60,000 ill – all from a disease that is almost completely preventable.

In general, with very few exceptions, people simply do not get cholera when the water supply works. It is almost unknown in the west for that single, simple reason.

As the World Health Organization (WHO) puts it: “Measures for the prevention of cholera have not changed much in recent decades, and mostly consist of providing clean water and proper sanitation.” 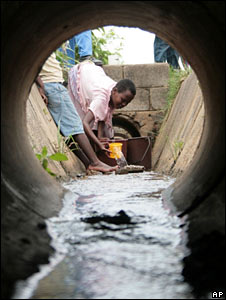 In Zimbabwe, political and economic circumstances have created a situation where the availability of clean water and proper sanitation is no longer routine.

People are now feeling the impacts of that lack of investment – investment that research shows is well worthwhile.

“Research shows that if you invest $1 in clean water and sanitation, the return is between $5 and $28,” says Yves Chartier of WHO’s water, sanitation, hygiene and health unit.

The cholera bacterium is far from being the only infectious microbe lurking in dirty water. Typhoid, cryptosporidium, giardia… the list continues.

“About 10% of the total global burden of disease is down to poor water, sanitation and hygiene,” says Dr Chartier.

It was this kind of statistic that led governments to sign up in the year 2000 to the Millennium Development Goals (MDGs) – a set of targets on issues such as maternal health, education and poverty.

The water target is straightforward – to halve the proportion of the world’s population without access to clean water and proper sanitation by 2015.

“The world as a whole is now on target to meet the water MDG, but a number of countries and regions are still off track,” says Andrew Hudson of the UN Development Programme’s (UNDP) water governance programme.

“Most of the countries that have made impressive progress were poor countries, and that to me is a tremendous message because it shows it’s less about the money and much more about the political will.”

How TV Reporters Explained The Internet To Viewers In 1993
Next Post: Resilient Strategy for Times Despite Toll of a Recession →