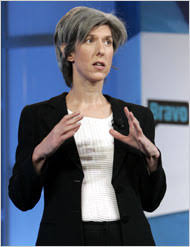 It would be fair to say that few network execs, if any, appreciate the power of women more than Lauren Zalaznick.

Zalaznick received a promotion this year from her boss, Jeff Gaspin, to be president of NBC Universal Women and Lifestyle Entertainment Networks. The lofty status was well-earned, as Zalaznick was put in charge of the Peacock’s iVillage efforts and [email protected], a content and marketing initiative that connects advertisers to femmes who watch all of the conglom’s programming. She also heads up the company’s green initiative.

“I honestly feel the emphatic acceptance by the company, and the marketplace factors that allowed me to form [email protected], was a huge compliment,” she says. “It’s really important to show clients and advertisers that consumers go to market on a behavioral basis, not 30 seconds at a time.”

While Zalaznick continues to build her reputation on the business side, she remains active in spearheading the programming on both her networks, Bravo and Oxygen. The latter, which is geared toward women, seems to be finding a comfortable place on the TV landscape as it competes against ladies-skewing Lifetime. Oxygen garnered its best numbers in network history in spring 2008. The net has a hit with “Tori & Dean: Home Sweet Hollywood.”

“I’m really focused on Oxygen at this second,” Zalaznick adds. “We’re using a lot of resources and energy in trying to reach out. Tori is blogging on iVillage, and the payoff we’ve seen in consumer response has been great.”

Over at Bravo, ratings have risen steadily for the last 10 quarters. “Top Chef” keeps attracting foodies, and other solid performers include “Kathy Griffin: My Life on the D List” and “The Real Housewives of Orange County.” Bravo took a hit, however — and lost its fashion sense — when Harvey Weinstein took No. 1 series “Project Runway” to Lifetime.

Zalaznick says Bravo will continue with reality shows only.

“I see Bravo as a bigger business brand,” she says. “We’re about 60-40 female now, which is perfect. I want to continue to deliver the most affluent, educated, engaged and influential consumer of Bravo content. I want to be nimble and ready to get them.”

Role model: “The person I wish I really were.”

Three things in life I can’t do without: “Work, Szechuan pepper, family.”

What I’m reading now: “The Maytress,” by Annie Dillard

Career mantra: “Your business is never as good or bad as people will read about.”