In N the game, you guide your ninja character through treacherous levels while watching out for mines, lasers, and heat-seeking missiles. Warning: N Game is highly addictive.

N is an addictive and award-winning 2D action puzzle stick figure game by Metanet Software. Inspired in part by Lode Runner, Soldat, and other side-scrolling games, in N The Game, you guide your ninja character through treacherous levels while watching out for mines, lasers, and heat-seeking missiles.

FLASH REQUIRED: This feature requires the Adobe Flash browser plugin. It will NOT work on iOS devices, including the iPhone and iPad, or web browsers without the Adobe Flash plugin installed. Desktop users can download Adobe Flash here.

Over the years, N Game has expanded beyond web browsers to various consoles and mobile devices. It has been released for the Xbox Live Arcade under the title “N+“, the Nintendo DS and Sony’s PlayStation Portable system (Sony PSP).

What exactly does N stand for? We’re not sure. Probably “ninja” right? Please let us know in the comments below. 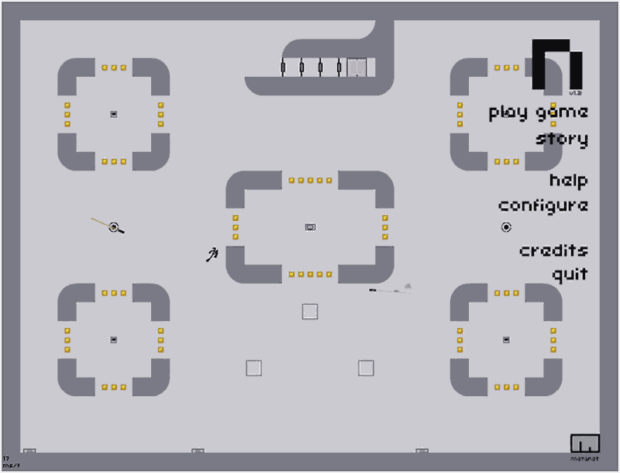 NERD NOTE: Metanet Software is an independent game development company founded in 2001 by Mare Sheppard and Raigan Burns. It is based in Toronto, Ontario, Canada. N The Game received the Audience Choice Award at the Independent Games Festival in 2005, and the Audience Choice Award at the Slamdance Guerilla Gamemaker Competition in 2006. N+ is the console and handheld version of the popular Adobe Flash-powered game.