You are here: Home / Entertainment / Music / 17 Whitney Houston Quotes To Help Inspire And Motivate Your Life

Whitney Houston's attitudes and advice have motivated countless women around the world. Here are some of the most inspirational Whitney Houston quotes.

Whitney Elizabeth Houston was an incredible vocalist and one of the best selling artists of all time. Throughout her musical career, she sold over 200 million records. In addition to her professional success, her attitudes and advice on everything from talent to truth have motivated countless women around the world. Here are some inspirational Whitney Houston quotes to help inspire and motivate your life.

Being A Woman In A Man’s World

“I like being a woman, even in a man’s world. After all, men can’t wear dresses, but we can wear the pants.”

Children Are The Future

“I believe that children are our future. Teach them well and let them lead the way. Show them all the beauty they possess inside.”

NERD NOTE: Clive Davis of Arista Records discovered Whitney Houston at the age of 19 when she was singing in a nightclub. He immediately signed her and guided her career from gospel to pop stardom.

“When I decided to be a singer, my mother warned me I’d be alone a lot. Basically, we all are. Loneliness comes with life.”

“I finally faced the fact that it isn’t a crime not having friends. Being alone means you have fewer problems.”

“I’ve turned down a lot of arena dates because I’ve done the big-arena thing. Now, I want to do something where people can feel me and I can feel them.”

“I’m an old-fashioned girl. And I love gospel. I like things that lift me up, inspire me.”

Getting Hurt In Life & Your Relationships

Living In Someone Else’s Shadow

“I decided long ago never to walk in anyone’s shadow; if I fail, or if I succeed at least I did as I believe.”

NERD NOTE: Joan Jett, Pat Benatar, Olivia Newton-John, Madonna, Debbie Harry, Janet Jackson, Terri Nunn, Kim Carnes, and Dolly Parton were all considered for the role of Rachel Marron in the 1992 film, The Bodyguard. Kevin Costner, who was also a producer on the film, wanted Whitney Houston in the role. He also didn’t want her to take acting lessons. He wanted Houston to be natural.

“I wouldn’t be with anybody who wouldn’t respect my opinion.”

“My mother taught me that when you stand in the truth and someone tells a lie about you, don’t fight it.”

Owning Your Own Decisions

“Nobody makes me do something I don’t wanna do, it’s my decision. So the biggest devil is me, I’m either my best friend or my worst enemy.”

Whitney Houston Quotes: “Nobody makes me do something I don’t wanna do, it’s my decision. So the biggest devil is me, I’m either my best friend or my worst enemy.”
Click To Tweet

“You can fool people. You can fool anyone anytime of the day, but you can’t fool yourself. At night, when you go home, you’ve got to be straight up with you.”

Moving Beyond Your Younger Mistakes

“When you’re older, you learn what it’s about to relax and enjoy. You’re not so young, not so eager. Some of the mistakes you made are gone. They’re over!” 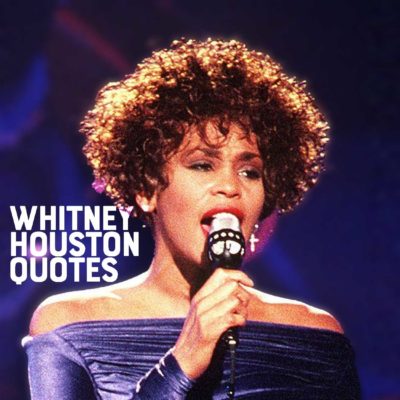 As a way to help remember her, we pulled together some of the most memorable …

Becoming Your Own Woman

“You learn, you grow up, and you become your own woman.”

NERD NOTE: Whitney Houston’s hit singles, including Saving All My Love For You, How Will I Know, I Will Always Love You, and I Wanna Dance with Somebody, helped her sell more than 170 million albums during her musical career.

“I know that I could really kill for my daughter (Bobbi Kristina). I know because I’m living for her, so I’m fierce when it comes down to it. And I feel the same about my husband (Bobby Brown) and my family. I’m just fiercely protective. It’s like, that’s my lair and nobody messes with my lair.”

“We all die. The goal isn’t to live forever, the goal is to have created something that will.”

Whitney Houston Quotes: “We all die. The goal isn’t to live forever, the goal is to have created something that will.”
Click To Tweet

NERD NOTE: Before she was a Grammy award-winning superstar, Whitney Houston was a fashion model. She got her first modeling gig in the early 1980s after a photographer saw her at Carnegie Hall singing with her mother. Soon after, photos of Houston appeared in several popular women’s magazines including Glamour, Cosmopolitan, and Young Miss. Houston was also one of the first women of color ever to be on the cover of Seventeen magazine.

Microgaming: One Of The UK’s Most Innovative Gaming Companies
Next Post: How To Enable the New Jack Ryan Alexa Skill