You might notice the uncanny resemblance in the image below to one of the most recognizable video game mascots of all time… Pac-Man. 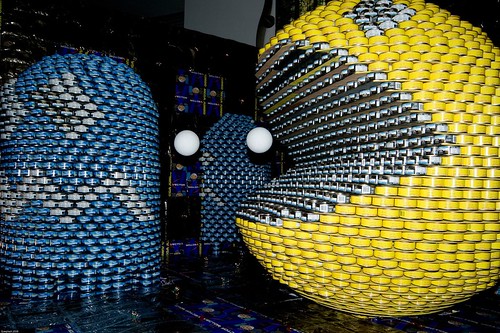 This giant Pac-Man sculpture was just one of the displays created for a charitable art show called Canstruction Vancouver. If you look closely, you might notice that the sculpture is made almost entirely out out of tin cans. Actually thousands of cans. After the show, the cans of food used in these displays were donated to the Vancouver food bank. Donations were also collected at the exhibit entrance.

Flickr user eyesplash Mikul attended the show and posted this image of Pac-Man and the blue ghost online. I forget which ghost was the blue ghost but their names were Blinky, Pinky, Inkey, and Clyde.

In case all this Pac-Man talk makes you feel like gobbling up some ghosts, here’s a web browser based version of Pac-Mac.