Do you own a Sirius satellite radio? Are you a Howard Stern fan? Act III of the award-winning radio documentary series, The History of Howard Stern, premieres December 21, 2009. The series revisits the legendary career and achievements of the self-proclaimed The King of All Media. 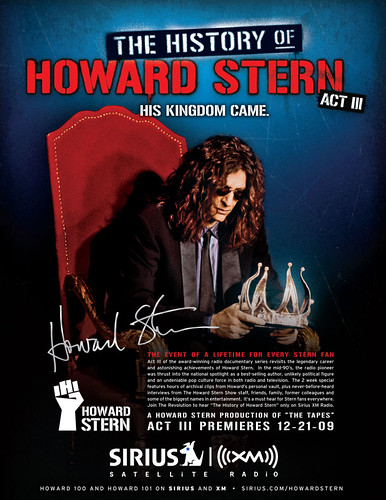 To help promote the series, Sirius created a fun timeline widget that allows you to scroll through Stern’s career and listen to sound bites. The widget covers everything from Crucified By The FCC and Fart Man to Sterns’ best-selling book Private Parts.

In the mid-’90s, the radio pioneer was thrust into the national spotlight as a best-selling author, unlikely political figure and an undeniable pop culture force in both radio and television. The 2-week special features hours of archival clips from Howard’s personal vault, plus never-before-heard interviews from The Howard Stern Show staff, friends, family, former colleagues and some of the biggest names in entertainment. It’s a must hear for Stern fans everywhere.

If you don’t already have a Sirius radio, there’s still time to pick one up or subscribe to their web-only streaming service.