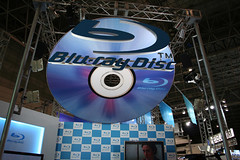 While there has been much focus on the developing battle between Blu-Ray and HD DVD, it seems that both formats are underperforming with consumers in the early going. Thus far, only $30M has been spent by consumers on the new formats, $25M on hardware and $5M on software, as reported by Reuters.

treblemaker
This blog is part of the MethodShop.com Network

How iTunes Saved The Office
Next Post:The Amazing Power of Makeup: Photos Of Celebrities With And Without Makeup