Big news today from Apple. At a special event, CEO Steve Jobs introduced the iPod U2 Special Edition as part of a new partnership between Apple, U2 and U2’s record label, Universal Music Group. This is the second custom iPod partnership that Apple has forged this year. A couple months ago they announced plans to launch a HP iPod.

The new U2 iPod is 20GB holds up to 5,000 songs, and has all of the standard features of an Apple iPod. But on the outside, the U2 iPod has a black faceplate with a red Click Wheel and a custom engraving of the U2 band member’s signatures on the back.

In addition to announcing the U2 iPod, Apple also announced that it created a music industry first, a “Digital Box Set” available exclusively in the iTunes Store. Called, “The Complete U2,” the digital box set will contain 400+ U2 tracks including all of the band’s albums and over 25 unreleased tracks. U2 fans will be able to purchase and download The Complete U2 beginning in late November 2004 for US $149. And anyone who buys the new U2 iPod will receive a coupon for $50 off The Complete U2. The iPod U2 Special Edition is expected to be available in mid-November for a suggested retail price of $349. After spending $350 on a U2 iPod and you’d think they’d throw in the U2 Box Set. 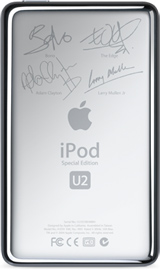 According to the press release, this new partnership between U2 and Universal Music Group and Apple will help the three companies create “innovative new products together for the new digital music era.” So does that mean we can expect more special edition iPods?
Related Articles:

Between iTunes And The iPod, Is Apple The Future Of Digital Music?
Next Post:iPod Photo: At long last!