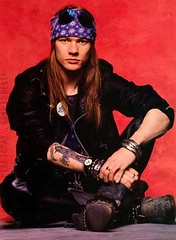 Dust off your leather pants and grab a can of Aqua Net. Guns N’ Roses released the single “Chinese Democracy” to radio stations nationwide today.

The long awaited album of the same name is slated to be released on November 23rd 2008. Chinese Democracy will be Guns N’ Roses 6th album and first studio release since September 1991.

Contrary to implications made by Sebastian Bach to The Artisan News Service in November 2007, Chinese Democracy will only be 1 album and not 4.

The track list and cover art for Chinese Democracy are still being finalized, but here’s a rough list to look over: