Framing Hanley has certainly come a long way in a very short time. First formed in 2005, the young Nashville based quintet posted some song demos that they recorded on a Macintosh on MySpace. Then in November of 2006, these demos were discovered by Brett Hestla, former Creed bassist, and frontman of Dark New Day. We had the good fortune to get some time with Framing Hanley. Here’s our interview with Framing Hanley’s lead vocalist, Kenneth Nixon.

How does it feel to finally have your debut album The Moment released?

It’s a very emotional record, yet very heavy at times as well. How does the band contrast the two extremes and mesh them together?

When we were writing The Moment, words and music just flowed at the specific time(s). In a sense, there are no two extremes, because we write what we’re feeling, and people feel a variety of emotions. That’s the thing I love most about music and this band, is being able to take your feelings, no matter what they are, and pour them out and have something so meaningful come from it.

Did you have any idea how huge “Hear Me Now” would be, considering it is your first single? I hear it all the time on the radio. How does it feel to have such a positive response from both dedicated fans and people who had never heard of you before?

It’s always a weird, yet AMAZING feeling having people come up to you every night at shows saying “Aww man, I LOVE your single ‘Hear Me Now.'” I remember when we wrote that song, that was definitely the defining moment in our career. It was the first song we wrote for “The Moment” and I feel as songwriters, that is when we really found what we could do as a band.

Do you remember where you were the first time you heard one of your songs on the radio?

Actually, the first time I really heard it on air was when we were driving back to our hotel from the studio in Orlando, Florida at like 7 AM sometime in February. I remember when we were in negotiations with our label, everyone was headed over my house last December and our drummer Chris called me saying “Dude, I just heard “Hear Me Now” on the radio!” It was a crazy weird feeling.

How involved did you guys get in the concept for the video for “Hear Me Now.” How does it tie into the subject matter of the song?

Originally, our friend and director for the video Mason Dixon talked to me about what the song was about and came up with a crazy ass video that we loved. I’m one of those songwriters who doesn’t typically go too far into what songs are about, because I love seeing different people have different interpretations, but the video fits surprisingly well to exactly what that song is about.

Up until the end of 2006, your band had a different name, Embers Fade. Why the name change and what is the significance of Framing Hanley?

Our drummer’s fiance Ashley Hanley passed away in October of 2006. She was a best friend of the rest of the band, and we wanted to do something to somewhat honor her. She used to take pictures of our band, hence “framing.” Naming our band Framing Hanley was the least we could do for someone that means so much to us.

How did you connect up with former Creed bassist Brett Hestla to record your two-song demo?

MySpace actually. He posted a bulletin saying he was looking for bands to work with, and we totally jumped at the opportunity.

How much did Hestla aid you guys in the recording and songwriting process? How did his input help Framing Hanley and what did you take away from working with such an established musician?

When it comes to recording, he’s a genius. He does no wrong in that shit. As far as song-writing, Brett is an amazing song-writer. I’m happy to say every song on this record was written by Framing Hanley, but Brett really helped open our eyes as to what we could do as songwriters. When we initially recorded “Hear Me Now” and “Wave Goodbye,” we went home for a few months afterward and when we came back in January of the next year, we had really grown as songwriters just from our time in the studio before.

Would you say Brett Hestla helped “discover” you?

Definitely. Brett was the one that put “Hear Me Now” into the hands of our label. If not for Brett Hestla, I don’t know if we would’ve had the opportunities we’ve had thus far.

Being such a young band, is the success you’ve achieved thus far ever stressful at times? For some young bands, like Silverchair, becoming instantly famous at such a young age took both an emotional and physical toll.

This career can be stressful on anyone, no matter what the age. This business has definitely made 5 of the most immature guys you’ll ever meet pursue a direct path for maturity… lol. 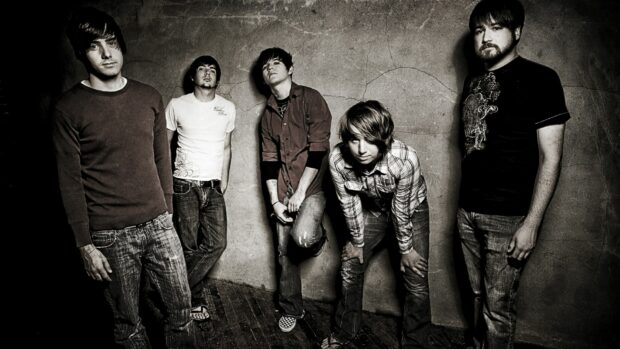 The songwriting composition process varies from musician to musician and even album to album. Talk us through your personal process of writing a song.

We usually start a song off acoustic, and get the structure down, and then I’ll finish the lyrics. Sometimes though, I’ll come up with lyrics to the band, and we’ll come up with the music from that. So it really varies.

For a band that has only been together for a couple years, Framing Hanley has accomplished a lot. Was there an instant chemistry between you guys when jamming? How do you explain your seemingly “overnight” success?

I remember the night that Tim auditioned for the open guitar slot we had. We wrote “Home” that night, so we knew then that it was an instant click. We wrote 9 songs for the record in the following few weeks, so I’d say there was definitely an instant chemistry. As far as an “overnight success,” we’d all been pursuing this career in various bands around Nashville for many years leading up to Framing Hanley, so it definitely wasn’t overnight.

You established quite a following in and around your hometown of Nashville. According to several local Nashville reviewers and your MySpace fans, Framing Hanley puts on an amazing live show. What do you guys do on stage that has everyone so excited?

We go out onstage every night with the sole intention of throwing down and pouring out every bit of emotion we have onto that stage. I think it’s every artist’s goal to “steal the show” on any given night, and we just make sure we have that mentality every night before stepping foot onto the stage. This doesn’t say that we DO steal the show, its just that if we didn’t have that desire, we wouldn’t put on the type of live show with the type of energy that we do.

When performing live up on stage, anything can happen from dentures falling out to seeing your future spouse singing along in the front row. What are the most embarrassing/coolest things that have ever happened to you guys on stage?

Hmmm. I tripped over a monitor at a show, and Luke fell off the stage at a show. Actually, both of those were at the same exact show. As far as the coolest moment, it’s always an amazing feeling when you look out in the crowd and see new faces singing along with your songs.

“It’s amazing to see new faces singing along with your songs.” @fhnixon from @framinghanley

You guys have a lot of tour dates scheduled with the band Evans Blue. What’s it like to tour with them?

Those guys are our best friends. We were very lucky to go out with such an established band on our very first tour but even luckier to go out with five of the coolest/nicest guys in the business. Evans Blue are just like us: totally immature and love to make fun of each other.

NERD NOTE: Evans Blue came together in early 2005. Five musicians, then in three separate bands, met through a local musician’s message board. Lead singer Kevin Matisyn suggested the name, which refers to the dye that is injected into the bloodstream to measure blood volume.

You seem to have a pretty rabid female fan base. Must be tough. What’s your secret?  : )

Publicly, you go by the moniker “Nixon.” Is that like a “Madonna” or “Prince” kind of thing or is your last name really that unpronounceable?

Yea, I like to compare myself to Madonna in my spare time. No, really, Nixon is my last name. I was in another band for about 2 years with another “Kenneth” (my first name) so we just got used to going by our last names.

What is the future for Framing Hanley? Where would you like to see your band in 5 years?

In five years I’d like to see us still touring and definitely with another record out by then. I’m totally excited about our future, but maybe that has a lot to do because I’ve heard the new stuff that we’re writing… lol.

Finish this sentence: We want all our fans to…

Know that we’re just like them. We’re just fans of music that got lucky and caught a break.

Get More Info On Kenneth Nixon and Framing Hanley

If you haven’t listened to Framing Hanley before or heard Kenneth Nixon sing, then definitely make a point to do so. This young star has a very intense voice reminiscent of Chester from Linkin Park. Listen to the breakdown in “Hear Me Now” to get an idea of what his voice is capable of.