Gift Idea 6: Catcher in the Rye 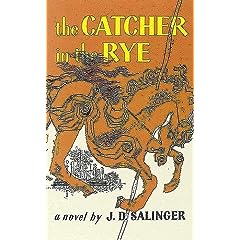 December 6th
Holiday Gift Idea #6:
The Catcher in the Rye

Do you have a little brother that should be reading more and playing less video games? The trick is finding something they can relate to. Harry Potter might work for younger kids. Older kids around 16 years-old, or at that ‘coming of age’, age, might find a connection with a novel like The Catcher In the Rye.

In J.D. Salinger’s brilliant coming-of-age novel, Holden Caulfield, a seventeen year old prep school adolescent relates his lonely, life-changing twenty-four hour stay in New York City as he experiences the phoniness of the adult world while attempting to deal with the death of his younger brother, an overwhelming compulsion to lie and troubling sexual experiences.

Salinger has captured the eternal angst of growing into adulthood in the person of Holden Caulfield. Anyone who has reached the age of sixteen will be able to identify with this unique and yet universal character, for Holden contains bits and pieces of all of us. It is for this very reason that The Catcher in the Rye has become one of the most beloved and enduring works in world literature.

$6.99 from Amazon.com
Buy It Now
methodshop.com