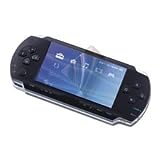 Sony PSP users got something to cheer about this week. On Wednesday, Sony officially announced the next PSP firmware update, 2.0. The new firmware will let users surf the Internet from wireless “hotspots” using the device’s built-in Wi-Fi functions.

Sony PSP owners have several ways to upgrade the firmware on their PSP:

Another great feature of the 2.0 firmware update is the ability to play more types of music files. The MP4 audio codec was added allowing the playback of MPEG-4 based AAC audio files as well as WAV (Linear PCM).

The 2.0 firmware update is only for customers who own the Sony PSP (PlayStation Portable) model number PSP-1001. If you don’t know what model PSP you own, take a look at the serial number located at the bottom of your PSP. The last seven digits of the serial number should end with PSP1001.

You can download the PSP Firmware System Update 2.0 here.

Have You Taken The iPod Shuffle Pregnancy Test Yet?
Next Post:iPod Baby Clothes