RIAA out to get more "swappers" 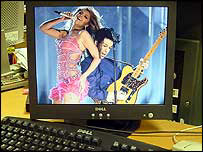 “Music swapping/downloading is said to be dirupting work at US colleges. The US recording industry is taking legal action against 750 computer users believed to be distributing music illegally over the internet.”

Students at 13 universities are among those targetted by the Recording Industry Association of America (RIAA).

Another 213 people who were identified earlier but failed to settle their cases are also being sued.

Record companies have taken action against a total of 6,191 illegal song swappers since September 2003.

As with preceding cases, the fresh action was made against so-called “John Doe” defendants, who are identified only by the codes given to their computers’ internet connections.

The MethodShop Spin: This will go one forever until the RIAA finally seizes the notion that peer-to-peer sharing and music downloading started on college campuses. If it weren’t for Shawn Fanning, there would be no Napster, who knows what else. College students have pioneered the distribution, and yes legality, of file trading) particularly music on the Internet.

Though I agree there are limits to this behavior and what is right and/or wrong, the RIAA is still going about this in the wrong manner. In all honesty, the RIAA needs to both turn its head and face the fact that the activities will not seize or simply diminish the RIAA as we know it today putting all liability and pacs into the distributors online (stores etc.) and the artist’s labels.

Indie Music Is So Popular Now That The Album Leaf Is In A HUMMER Commercial
Next Post:Apple Fails to Fix Known Audio Defect Before Releasing iPod Photo