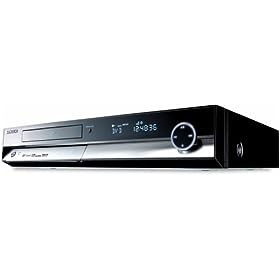 Get ready to start upgrading your DVD collection. The next generation of DVD players featuring Blu-Ray are hitting the market. One model in particular that’s getting a lot of attention is the Samsung BD-1000. According to Samsung, “Today’s high-definition televisions (HDTV) are capable of displaying a far greater amount of movie realism than a DVD can deliver. That’s why Blu-ray DiscTM technology was developed.”

Obviously Samsung thinks pretty highly of their own product, but what are other people saying about the BD-1000?

Audioholics: “Samsung’s unique technology – one pickup with two lenses – allows it to also play standard DVDs and CDs in addition to Blu-ray discs while allowing for more cost-effective production.”

Gizmodo: “Samsung has produced a very interesting product. The BD-P1000 is a large, healthy device with a 20 second BRD load-time and a crisp, clean picture. On a full 1080p set, the picture is as crisp as fresh-baked pizza and the audio is surround-sound-alicious.”

Once you get a new Blu-Ray DVD player, the next step is to invest in some Blu-Ray DVDs. Here’s a short list of some the first Blu-Ray DVDs to be released:

This Samsung Blu-Ray DVD player is available on Amazon.