The only ad that had people talking the next day was the GoDaddy Super Bowl commercial featuring model and WWE diva Candice Michelle.

For the most part, the 2005 Super Bowl commercials were pretty lame. Apparently the shadows of Janet Jackson’s Nipplegate were still looming from 2004. The only ad that had people talking the next day was the GoDaddy Super Bowl commercial featuring model and WWE diva Candice Michelle. 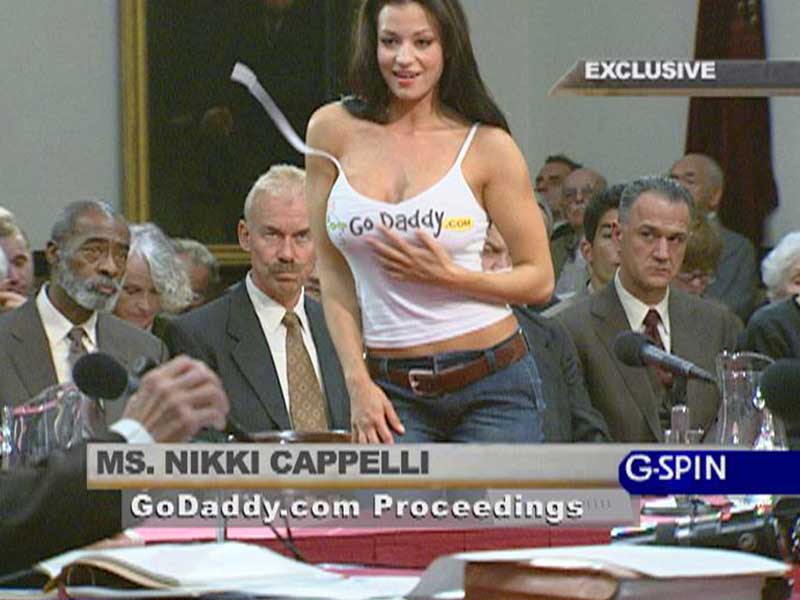 GoDaddy planned on airing a two-part commercial featuring Candice Michelle appearing before a fake Congressional hearing on broadcast decency. Candice, playing the part of a fictional character named Nikki Cappelli, asks permission for her GoDaddy commercial to air during the Super Bowl. But she gets so excited during the proceedings that she starts jumping around causing a Janet Jackson-style Nipplegate “wardrobe malfunction” when her tank top strap breaks.

Candice Michelle’s GoDaddy commercial is definitely the riskiest Super Bowl ad of 2005, but it’s far from controversial. However, FOX gave in to viewer complaints after the first ad aired and decided to kill the second commercial. So here’s the unseen second GoDaddy commercial. Enjoy!

Where To See More Of Candice Michelle

As wrestling fans will tell you, Candice Michelle is already a very popular WWE athlete. She will even do her GoDaddy dance in the ring sometimes.

But if you want to see more of Candice Michelle outside of WWE or her GoDaddy Superbowl commercial work, then check out her Cinemax debut in “Hotel Erotica” (2002). You can view video clips of the movie at Nitro Video (adults only) or stills at Mr. Skin (adults only).