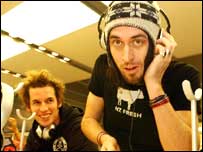 “It has been an exciting, if strange, year for digital music as it continues to lead a double life, finally embraced by the mainstream music industry while continuing to thrive in the underbelly of illegitimate downloads.” [Via BBC News]

Everyone wanted a digital music player for Christmas

MP3 has grown up from a once obscure file format to an ever-raging compression standard swapped by millions of music fans everyday throughout cyber space. The format supported by digital players like Apple’s iPod, and other personal music players, remains a progressive stronghold only in the file-sharing realm though. The digital music revolution is fore grounded in proprietary technology such as WMA, AAC etc. However, despite these paying services, file sharing, and legal distributions, digital music never the less has grown-up significantly and the players like Apple’s iPod, increased in overwhelming consumer demand.