The world’s biggest aircraft model – a replica Airbus A380 – has been unveiled at the approach to Heathrow.

Weighing in at 45 tonnes, the plane is taking the place of the British Airways model Concorde, which greeted passengers as they arrived at the airport for 16 years, and has been moved to the Brooklands Museum at Weybridge, Surrey.

Its replacement, the Airbus, will remain on the site until 2013 under a deal signed by the airline and BAA, Heathrow’s owners.

The model, in the Emirates livery, is as big as a smaller member of the Airbus family, the short-haul A320, and twice the size of the Concorde replica.

It has a wingspan of 28.5 yards and is 26.2 yards long and took 18 months to build and install yet it is still only a third of the size of the real thing.

The model needed 150 gallons of paint and 600 tonnes of concrete were needed for the foundation to support the structure. 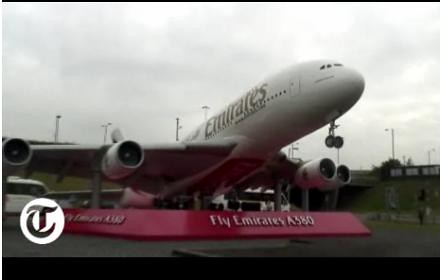 It was built in California and shipped to Britain via Ontario in an Antonov cargo plane, arriving in the form of a huge model aircraft kit, which took 18 days and nights to be assembled.

Installing it was a feat of engineering in itself. Fred Diprose, who lead the 20-strong team, said that the site had to be excavated and then a crane brought in to drop the new model in place.

But given the site’s proximity to the runway, much of the work could only be done during the early hours of the morning.

“It meant a lot of nights without sleep,” he said. “I am feeling pretty shattered by now.”

The model will be seen by around 25 million people a year as they approach Heathrow and is seen by advertisers as one of the prime slots in the whole of the country.