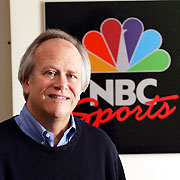 On Sunday, Oct. 1, Dick Ebersol was in Chicago working the night shift.

Since the beginning of the football season, the chairman of NBC Sports & Olympics has been putting in seven-day weeks, traveling with announcers John Madden, Al Michaels and about 125 others to the site of the network’s prime-time “Sunday Night Football” broadcast.

Before the game, Mr. Ebersol walked the sideline in the refurbished Soldier Field, where he was greeted by Bears Chairman Michael McCaskey.

Both men were smiling. Mr. Ebersol’s $3.6 billion bet on broadcasting Sunday night National Football League games is paying off big-time so far in ratings, revenue and promotional opportunities for NBC’s slate. Though the Bears smothered the Seattle Seahawks in the Oct. 1 game, viewership this season is exceeding expectations. It’s also up over the numbers “Monday Night Football” used to generate on ABC.