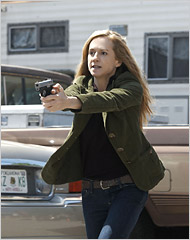 Cable television has always feasted on the summer audiences abandoned by the largely vacationing broadcast networks, but this season has been a spectacularly good one.

A host of cable channels have generated significant successes with original shows this summer, mainly hourlong dramas like “The Closer” and “Saving Grace” on TNT; “Army Wives” on Lifetime; “Burn Notice” on USA; “Damages” on FX; and “Mad Men” on the most unlikely channel, AMC.

All these shows, many of which have been critically acclaimed as well as popular with viewers, have emerged on basic cable, not a premium channel like HBO.

If that seems like a trend, some cable executives are bold enough to claim even more. “We’re at the tipping point,” said Steve Koonin, president of Turner Entertainment, which has the season’s most-watched dramas in “The Closer” and “Saving Grace.”

“It’s our belief that we and the other basic cable networks can begin matching the broadcast networks series for series,” he added. “It’s only a matter of time before we have as many big hits as they do.”

Obviously the definition of a hit remains different for cable. “The Closer,” now in its third season, drew 8.8 million viewers for its season premiere, a number that any network would lust after in the summer — and find more than acceptable any time of year.

But big network hits still attract double or even triple that audience. Broadcasters have also had a notably weak season, as their cost-savings strategy of filling hours with reality series has been mostly a bust. No network reality series has broken out, as many have in recent summers.

Still, the basic cable channels are getting noticed. Steve McPherson, the president of ABC Entertainment, said last month that given the performance of the cable dramas, he would begin to consider doing more scripted shows in the summer.

[Check it Out: NY Times]