How many people visited Style.com, the online home of Vogue and W magazines, last month? Was it 421,000, or, more optimistically, 497,000? Or was the real number more than three times higher, perhaps 1.8 million?

The answer — which may be any, or none, of the above — is a critical one for Condé Nast, which owns the site, and for companies like Ralph Lauren, which pay to advertise there. Condé Nast’s internal count (1.8 million) was much higher than the tally by ComScore (421,000) or Nielsen/NetRatings (497,000), whose numbers are used to help set advertising rates, and the discrepancies have created a good deal of friction.

Other big media companies — including Time Warner, The Financial Times and The New York Times — are equally frustrated that their counts of Web visitors keep coming in vastly higher than those of the tracking companies. There are many reasons for the differences (such as how people who use the Web at home and at the office are counted), but the upshot is the same: the growth of online advertising is being stunted, industry executives say, because nobody can get the basic visitor counts straight.

“You’re hearing measurement as one of the reasons that buyers are not moving even more money online,” said Wenda Harris Millard, president for media at Martha Stewart Living Omnimedia and, until June, chief sales officer at Yahoo. “It’s hugely frustrating. It’s one of the barriers preventing us from really moving forward.”

Online advertising is expected to generate more than $20 billion in revenue this year, more than double the $9.6 billion it represented as recently as 2004. Nobody doubts that the figure will grow — particularly as advertisers hone their techniques for aiming messages to particular consumers — but the question remains how much the clashing traffic figures will hold the market back.

“This is a bit of an anomaly because this disagreement doesn’t happen offline,” said Jim Spanfeller, president and chief executive of Forbes.com. By his calculation, Forbes.com had 11.6 million United States visitors last month, far more than the 7.5 million estimated by Nielsen/NetRatings and 5.8 million from ComScore.

Of course, media companies have haggled with advertisers over audience numbers for decades. Television broadcasters cannot prove how many people watch their shows. Print outlets have circulation numbers, but those do not capture multiple readers of each copy. So media companies have needed companies like Nielsen to provide panel-based estimates.

But the Internet has given publishers a new form of ammunition: raw server data with precise numbers of site visits and page views. This data does not correlate directly to the number of visitors, but it does give them ballpark figures that they say are far more accurate than the extrapolations drawn by ratings companies based on panel samplings. 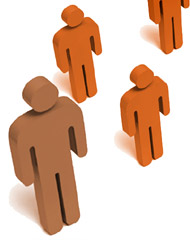