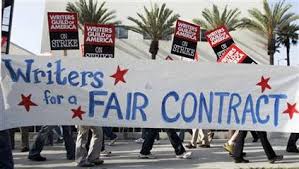 If a settlement with the striking Writers’ Guild is not reached within the next few weeks, broadcast network prime-time pilot development for the 2008-09 season could be significantly damaged. It also puts the May upfront ad buying period for next fall into a state of disarray, according to network executives and industry sources, none of whom would speak for attribution due to the sensitivity of negotiations.

Network execs explained there are too many variables to say exactly how next year’s upfront would play out if the strike continues. But most agree that if it is not settled and writers aren’t back on the job by Jan. 1, about 25 percent of the usual number of pilots produced for next season would have to be scrapped due to time constraints.

If the strike lasts until Feb. 1, that number of scrapped pilots goes up to about 50 percent. And if the strike lasts well into February—a doomsday scenario—the entire new program development season would have to be scrapped, unless the industry decided to move the upfront back into late June or July.

Another option the networks are quietly prepping for is to just bring back their returning shows for the start of next season, develop new shows through the summer and then introduce their new slates in midseason, beginning in January 2009.

Sources familiar with the situation say the Guild actually caught the networks by surprise when it decided to strike on Nov. 4, only a few days after the contract expired. In its dealings with the networks’ news operations, the Guild has traditionally worked well past the expiration of its contracts.

“The networks did not think a strike would be called so soon,” said one observer familiar with the networks executives’ position. “Even though they tried to shoot some pilots earlier, they did not make enough progress on that.”

One source at the Guild told Mediaweek that the timing of the start of the strike “was specifically chosen at a point where we felt we would have the greatest impact and create the most leverage for us.”

But one network executive retorted that the more damage the Guild does to the development process, the more damage it does to its members’ careers. “Hampering the number of new shows the networks can put on the air next season is only going to adversely affect their jobs because there would be fewer projects to work on,” the exec said.

Another network executive even wondered how vital new shows actually are to the upfront process. “Most advertisers want to get into the most popular returning shows, and in buying upfront programming, they include some of the new shows in their packages,” the exec said.
“But the new shows have no track record, so it is just a crap shoot anyway.”

He implied that there is no reason the new shows for next season couldn’t be sold separately at some later point, possibly in scatter with some type of guarantees. “But we are not going to rush once the strike is settled to put just any new shows on the air that we can get ready if the quality is not good,” the entertainment exec said.

ABC, CBS, NBC and Fox each have between four and 10 new scripted sitcoms and dramas for next season in various stages of development, but only a few actually have shot pilots. And those pilots need additional work. For example, The CW has greenlit no new programming for next season.

“Even if a tentative agreement is reached by the negotiators within the next few weeks, it will take a few weeks after that to get the Guild membership to vote to ratify it,” one high-ranking network executive said. “And then it will take another few weeks to gear back up, with the first priority being to finish writing this season’s shows.”