Attention citizens of the English empire… well, at least people who live in London. A new service promises Londoners they’ll never have to spend much time looking for the loo (aka toilet). This week the Westminster City Council launched “SatLav” – a toilet-finding service for cell phone users. 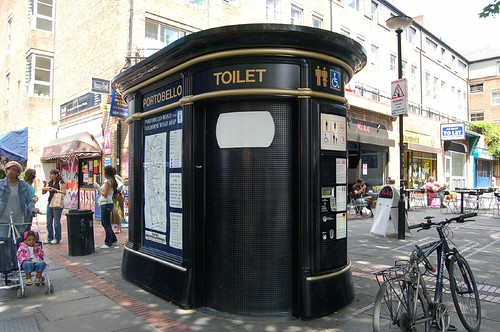 Tourists, theatergoers, shoppers and pub patrons in London’s West End can now text the word “toilet” — and receive a text back with the address of the nearest public facility.

The SatLav system, which covers 40 public toilets, pinpoints the caller’s position by measuring the strength of the phone signal. Each text cost $0.50, and most of Westminster’s toilets are free. The council said it hopes the service will stop people from urinating in alleyways, saying some 10,000 gallons of urine ends up in Westminster streets each year. Yum!

The First Text-Based Toilet-Finder in Britain

Companies such as Vindigo in the U.S. offer similar mobile phone searches. But SatLav is being touted as the first text-based toilet-finder in Britain. Just don’t drop your phone in the toilet while you’re there.