The Adventures of Prince Achmed – The first full-length animated film

Considered by many to be the first full-length animated film, the story of Lotte Reiniger's mesmerizing work is taken from THE ARABIAN NIGHTS. A young prince embarks on a series of great adventures, including uniting with Aladdin and the Witch of the Fiery Mountains to save a beautiful princess. Produced in Germany this color-tinted film utilizes laboriously cut out silhouettes to tell its story.

Why is this film so important?

The first time I saw, or even heard of The Adventures of Prince Achmed, I was actually at a concert. My comedian friend, Adam Wade, and I went to go see indie rock heroine Mary Timony play at Maxwell’s in Hoboken, NJ. Before Timony came out on stage, this drunk girl stole Adam’s glasses and totally pissed him off. While Adam was trying to recover his glasses, I noticed a Macintosh iBook hooked into a projector (the big glowing white Apple logo is hard to miss). During Timony’s performance, this elaborate and colorful silhouette animation played in the background. At first I thought Timony had made the movie using an animation application like Adobe Flash, but luckily I was able to chat briefly with her after the show and she politely set me straight. Timony was just using her iBook’s DVD player to play the movie The Adventures of Prince Achmed. I think she was a little annoyed I was asking about the background projection and not her music, but I bought 3 of her CDs at the show and I’m actually a big fan of hers.

The Adventures of Prince Achmed is a silent film. But the latest DVD re-release features the original Wolfgang Zeller musical score that accompanied the film in its initial 1926 theatrical run.

One of the things that makes this film so remarkable, is the animation technique used by Reiniger. Unlike typical cartoons that used a pencil on paper flip book approach, Reiniger’s film features a silhouette animation technique she invented which involves the manipulation of cardboard cutouts and thin sheets of lead under a camera.

When asked how exactly she animated her film by the British magazine Sight & Sound in 1936, Reiniger had this to say:

“…The technique of this type of film is very simple. As with cartoon drawings, the silhouette films are photographed movement by movement. But instead of using drawings, silhouette marionettes are used. These marionettes are cut out of black cardboard and thin lead, every limb being cut separately and joined with wire hinges. A study of natural movement is very important, so that the little figures appear to move just as men and women and animals do. But this is not a technical problem. The backgrounds for the characters are cut out with scissors as well, and designed to give a unified style to the whole picture. They are cut from layers of transparent paper.” ~ Lotte Reiniger, Sight & Sound (1936)

If you are involved in the animation or film industry, then Lotte’s ability to use silhouette marionettes to not only tell a story but evoke emotion will blow your mind. Every moment was created frame by frame, composed of detailed paper cutouts and posed by hand. It took her 3 years to make the films. Even when judged against today’s modern filmmaking expectations, “The Adventures of Prince Achmed” is a visually stunning achievement. 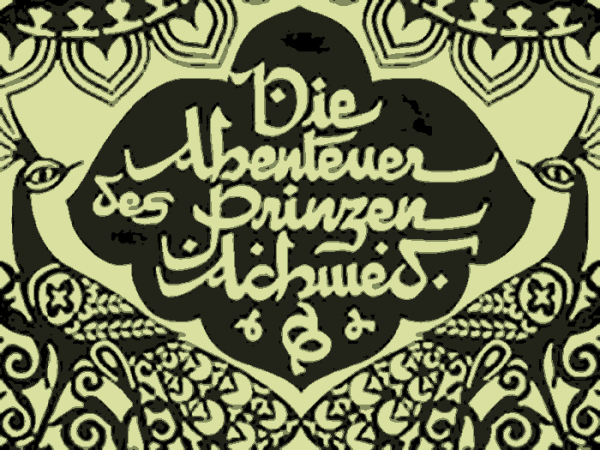 Reiniger’s rare talent and her love for silhouette art developed at a very early age. As a child Reiniger used to cut out elaborate silhouettes for friends and family members as gifts.

“I could cut silhouettes almost as soon as I could manage to hold a pair of scissors. I could paint, too, and read, and recite; but these things did not surprise anyone very much. But everybody was astonished about the scissor cuts, which seemed a more unusual accomplishment. The silhouettes were very much praised, and I cut out silhouettes for all the birthdays in the family. Did anyone warn me as to where this path would lead? Not in the least; I was encouraged to continue.” ~ Lotte Reiniger, Sight & Sound (1936)

The color-tinted film uses a diverse cast of characters, animals and elaborate backgrounds that make an otherwise limited monochromatic experience come alive. This may be hard to believe, but Reiniger’s cutouts clearly display such details as hair, lace, leaves and feathers. Her attention to detail is truly remarkable

Based on the classic collection of stories “Arabian Nights,” the film tells the story of an evil African sorcerer who tricks a young prince named Achmed into riding a wild magical flying horse which he does not know how to control. The evil sorcerer assumes that the Prince will eventually get thrown from the flying horse and plunge to his death.

However, Prince Achmed manages to tame the flying horse and instead gets whisked away into a series of adventures that include encounters with Aladdin, the Witch of the Fiery Mountains, the beautiful Princess Pari Banu and of course a showdown with the evil African sorcerer.

Here are a few scenes of note to look for while you watch the film:

Not only is The Adventures of Prince Achmed the oldest surviving animated movie and a piece of film history (two earlier films were made in Argentina by Quirino Cristiani, but there are no surviving copies), but it’s a beautifully innovative and enchanting masterpiece. The film is so rich with wild imagination, you will forget you’re watching paper cutouts and be amazed at how much expression Lotte Reiniger can evoke with her intricate hand-cut silhouettes. Someday this film will get the recognition it richly deserves.