Fort Lauderdale Commission candidate Mike Lambrechts had a campaign sign problem. His political yard signs that he placed in both his and his supporter's yards kept disappearing. Here's how he used an AirTag to recover his stolen political yard signs and catch a thief.

After a city council candidate keep noticing his campaign signs were “mysteriously” disappearing from both his yard, as well as his supporters, he decided to take action. Here’s how a Fort Lauderdale politician was able to use an Apple AirTag tracking device to recover his stolen political yard signs and help the Police catch the thief red-handed.

Even local politics can be a dirty game. Mike Lambrechts, a first-time political candidate for city council Commissioner in Fort Lauderdale discovered this first-hand when his political campaign signs started disappearing. In just a few weeks, over 20 of his signs had been stolen.

But who was taking his yard signs, and why?

Campaign signs are an important part of local politics, and it is not unusual for them to be missing or destroyed during election season. To help reduce the visibility of their competitors, political rivals and their supporters will sometimes steal or destroy the campaign signs of their opponents.

But after multiple thefts, Lambrechts came up with an idea to catch the culprit(s). Lambrechts embedded Apple AirTags (~$30 each via Amazon) in a new batch of replacement yard signs. These tiny location tracking devices are only about the size of a quarter and relay location data back to the owner.

Now armed with an embedded AirTag, the next time one of his campaign signs got moved from its intended location, Lambrechts would be notified immediately by the Find My app on his iPhone.

How The Apple AirTag Works

After purchasing an AirTag, users connect the tiny tracking device to their Apple account. With a built-in battery that can last over a year, the AirTag uses secure Bluetooth signals from nearby devices to relay its location back to the owner.

As long as another Internet connected Apple device is nearby, AirTag owners just need to open the Find My app in Apple’s iCloud to see a map of where the AirTag device is located. The Bluetooth signal is secure and the whole process is both encrypted and anonymous to protect the user. 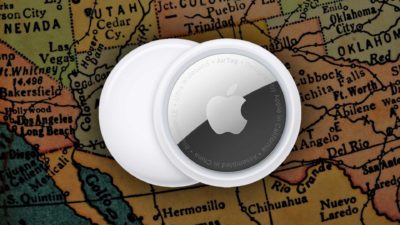 13 Creative Ways To Use An Apple AirTag

Besides finding your lost keys, there are plenty of creative ways to use an Apple AirTag.

Read more13 Creative Ways To Use An Apple AirTag

Sadly, it didn’t take long for another one of Lambrechts’ campaign signs to go missing again. Once Lambrechts got an alert that an AirTag attached to one of his signs was moved, he immediately contacted the Fort Lauderdale Police.

Using location data from the AirTag, Police were able to quickly locate the stolen political yard sign. But the shocking part of this story, is where they found it.

Scott was “caught red-handed” by Police. Not only does she have motive (she is running for the same Fort Lauderdale commission seat as Lambrechts), but his stolen campaign sign was sitting inside a green Jeep parked in Scott’s driveway.

At first, Jacquelyn Scott provided a strange excuse to Fort Lauderdale Police. She claimed that she had permission to remove Lambrechts’ campaign signs from private property. The Police officers who responded to the call at Scott’s Colee Hammock home in eastern Fort Lauderdale were wearing body cameras that recorded her statements.

In response, Lambrechts signed an affidavit officially contradicting Scott’s claims. She in fact did not have his permission to remove campaign signs from the private properties of either his home or his supporters.

It didn’t take long for members of the press to contact Scott about the incident. She later told the South Florida Sun Sentinel another odd excuse. According to Scott, one of her campaign workers removed Lambrechts’ sign from the yard of a Rio Vista neighborhood home… but planned on later returning the sign to Lambrechts.

Wait, what? How does that make any sense? Why would you intrude on private property and remove a political opponent’s campaign sign, just because you wanted to return it?

So, the campaign worker didn’t “steal” the sign, instead they decided to “borrow” it without permission? I’m confused.

And, why all of the lies anyway? Scott was caught red-handed. Wouldn’t it be easier to just tell the truth? If Jackie Scott is willing to spread such an elaborate web of lies about a stolen campaign sign, what must voters be thinking right now about her credibility? How trustworthy could she even be as an elected official?

An important distinction of note, political campaign signs can never be placed on public or government property. They can only be placed on private property.

Different states take different approaches to penalizing the illegal theft and vandalism of political yard signs, but most treat the conduct as a misdemeanor. This means that even though misdemeanors are minor offenses, stolen political yard signs can have serious consequences that multiply based on the number of signs involved. For example, if the total value of the property that was stolen or vandalized is over $1,000, then it may be considered a felony offense.

Depending on their size and material, the average political yard sign can cost ~$20 or more. Combined with an embedded Apple AirTag ($30 each), if Police caught Jackie Scott with 20 or more of Mike Lambrechts’ stolen political yard signs, she could have potentially been charged with a felony.

Little did Mike Lambrechts know at the time, but spending $30 on an Apple AirTag would earn him an incredible amount of free exposure and good press. The theft of his political yard signs by a member of Jackie Scott’s campaign team wasn’t just widely reported on by news organizations in Fort Lauderdale and Florida, but media around the world have taken interest in this story.

According to a statement Lambrechts made to the South Florida Sun Sentinel, he said the money he spent on the Apple AirTags for his campaign signs “was worth every penny.”

Although both Jackie Scott and Mike Lambrechts are dominating the headlines right now in this local race, they are just two of seven candidates running for Fort Lauderdale’s District 4 commission seat. The other candidates in this November 2022 election include Ted Anthony Inserra, Kevin Cochrane, Warren Sturman, Kathleen “Kitty” McGowan, and Edward Thomas Rebholz.

Between their involvement in stalking cases and domestic conflicts, Apple AirTags have started to develop a bad reputation since their debut in April 2021. But stories like this stolen yard sign incident are helping prove the AirTag’s positive and useful utility.

Do you own an AirTag? What are some of the creative ways that you have used your AirTag? Please let us know in the comments.

The 28 Most Sexist Ads From The Mad Men Era Of Advertising
Next Post:11 Famous Seattle Landmarks That Every Tourist Must See, At Least Once