This week Apple released a very minor firmware update for the Apple TV. The 2.3.1 update only adds a “Network Test” option to help users troubleshoot Internet connections. That’s it. Seriously, it’s hardly worth the trouble. But the update does do something we weren’t expecting… it disables and deletes the Boxee software.

So if you’ve already hacked your Apple TV and installed the Boxee software, you should probably skip this 2.3.1 update and wait for a new version of the Apple TV firmware that actually adds some new features. 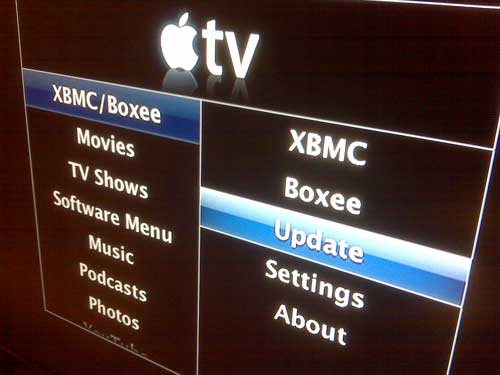 Unfortunately this has been a rough few weeks for Boxee. First they had to remove the ability to watch Hulu videos from their software because Hulu’s content partners were complaining. And now Apple is releasing minor software updates that disable Boxee.

If you love Boxee, then you’ll want to disable automatic Apple TV updates. Here’s how:

Tutorial: How to Install Boxee on Your Apple TV

All you need to hack your Apple TV so it can use Boxee is a USB stick. If you own an Apple TV, then you need Boxee. Install Boxee and set your Apple TV free.