You are here: Home / Technology / Gadgets / The Next Apple TV Could Cost Just $99

The Next Apple TV Could Cost Just $99

Apple fans have their fingers crossed that the $99 revamp with cloud storage isn't just a rumor. 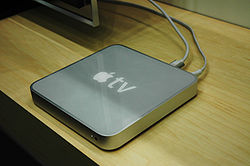 Apple is on a roll — selling iPads like hotcakes, zooming past Microsoft in sales, generating buzz for the soon-to-be-announced iPhone 4G. Now, rumors of a new and improved Apple TV have television junkies salivating.

I have a confession: I almost forgot there was an old and to-be-improved-upon Apple TV already on the market.  The $300, sometimes problematic box didn’t seem to pick up steam amongst my techiest friends back in 2007, nor did it after some minor movie improvements, so I kind of shoved it to the back of my brain. The updated system with a $99 pricetag and cloud storage capabilities, however, could change that — assuming it’s not just a rumor. ReadWriteWeb points out that with the announcement of Google TV a few weeks ago, now would be a good time for a Mac version overhaul.

An Apple insider apparently told Engadget that the cheaper system cuts cost by needing far less storage (thanks to the cloud storage capabilities) and sport a smaller, much simpler design. (Possibly as small and simple as an iPhone?) Viewers will be able to stream HD programming and show off their 42″ wall-mounted app menu to their neighbors. Keeping up with the Joneses will be more affordable than ever.

We’ll probably know in a week or so whether the hype is just hype or if there’s substance behind it, as June 7 is Apple’s Worldwide Developers Conference and Steve Jobs is poised, as usual, to make the company’s hottest announcements.