The concept may be radical, but it might just have to be if the worst predictions of climate change are realized.

The Lilypad, a floating ecopolis for climatic refugees, is the creation of Belgian architect Vincent Callebaut.

“It is” he says, “a true amphibian, half aquatic and half terrestrial city, able to accommodate 50,000 inhabitants and inviting biodiversity”. 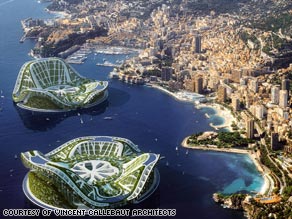 The Lilypad as imagined by architect Vincent Callebaut moored off the coast of Monaco.

Callebaut imagines his structure at 250 times the scale of a lilypad, with a skin made of polyester fibres coated in titanium dioxide which would react with ultraviolet light and absorb atmospheric pollution.

The Lilypad comprises of three marinas and three mountain regions with streets and structures strewn with foliage. “The goal is to create a harmonious coexistence of humans and nature,” said Callebaut.

With high density populations living in low-lying areas — The Netherlands, Polynesia, Bangladesh — the ecopolis, its creator believes, could be the answer to mass human displacement that global warming is predicted to cause.

In its most recent 2007 report the Intergovernmental Panel on Climate Change predicted sea levels will rise by 60-90 cm during this century. Some climate scientists like James Hansen think that if greenhouse gas emissions aren’t checked then those figures might be much, much worse.

In practice, Callebaut envisages the Lilypad sailing the seas, following currents like a futuristic cruise ship. He also thinks that it could “widen sustainability in offshore territories of the most developed countries such as Monaco”.

You can’t help thinking that the well-heeled residents of the Principality might have a thing or two to say about 50,000 climatic refugees bobbing around in the harbour, but you cannot fault Callebaut’s ambition.

His previous creations — showcased on his website — reveal an imagination working at full throttle with sustainable design lying at its heart.

Anti-Smog — a prototype of depolluting architecture and Ecomic — an ecotower rising up from the foundations of Aztec ruins are two further examples of his eco design credentials. The Perfumed Jungle, Fields in Fields and The Fractured Monolith may sound like titles for various genres of novel but are, in fact, names for sustainable projects in Callebaut’s growing portfolio.

Now all he needs is to find someone brave enough to build on the vision he has created.