A satellite image of a B-2 stealth bomber has been removed from Google Maps after going viral online.

In December 2021, Reddit user Hippowned discovered a strange image of what appeared to be a B-2 stealth bomber in mid-flight on Google Maps. The B-2 Spirit bomber image instantly went viral online. But anyone looking for it now will be sadly disappointed. The photo of the B-2 stealth bomber has since disappeared from Google Maps.

It’s unknown if Google was asked to remove the image of the B-2 by the U.S. Air Force, or if the image was just replaced with a normal update of new satellite imagery.

A satellite image of a B-2 stealth bomber has been removed from Google Maps after going viral online.
Click To Tweet

What Was A B-2 Spirit Bomber Doing In Missouri?

Why was a stealth bomber flying over Missouri? Is Missouri a security concern for the U.S. Air Force? No, nothing like that. The location of photo is about 20 miles south of the U.S. military’s Whiteman Air Force Base. It’s likely the B-2 was just captured in a satellite image near the base during a routine patrol.

NERD NOTE: Northrop Grumman, the manufacturer of the B-2, first developed the aircraft in 1989. The aircraft was invaluable to the military during the Cold War. It was designed to carry nuclear weapons and sneak into enter enemy territory undetected.

Why Satellite Photos Of Flying Objects Have Blurry RGB Shadows

The weird, blurry look of the stealth bomber has nothing to do with its stealth technology. It’s due to how satellite cameras capture the red, green, and blue (RGB) channels separately before combining them into a single full-color image.

A similar effect occurred in 2010 when Google’s satellite cameras captured a photo of an airplane flying near Chicago. However, the RGB shadows in the airplane image are much more pronounced than the B-2 bomber. This is because of the different speeds that each aircraft were traveling at when they were photographed, as well as the advancements in imaging technology in the years between the two photos. 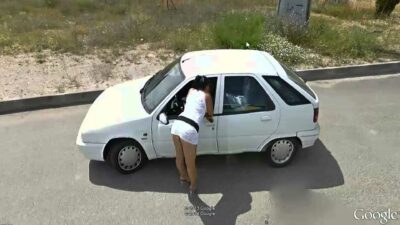 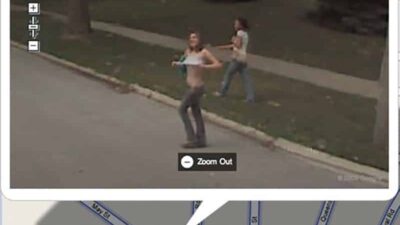 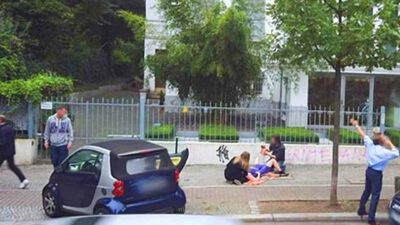 This B-2 bomber photograph is just one of the many interesting images that Google has captured on camera over the years. From nude sunbathers and Brazilian hookers, to a sidewalk birth and LARPers in Wisconsin, Google has quite the archive of life on planet Earth.