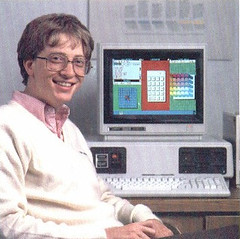 I guess his 50 billion dollar stockpile is sufficient enough to get him through his golden years. Last week, Bill Gates announced that he would be retiring from Microsoft in July of 2008.

In a letter to his employes, Gates had this to say:

“For these last 31 years, I’ve had the best job in the world. I’ve worked with some of the brightest and most passionate people in the world. Together, we’ve built a great company whose products have empowered people around the world.”

Gates, who co-founded Microsoft, was the quintessential high school nerd who got bone-jarring “noogies” every day at lunch by bullies. Now, he will be retiring as the richist man in the world… sans noogies.

What does Gates have to look forward to in retirement? Here’s a few ideas:

The only question left is what should Microsoft employees get his for a retirement gift? Kareem Abdul Jabbar got rocking chairs as a farewell send-off from the NBA. What would you get Bill Gates, the man who has everything?