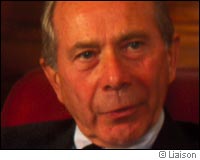 MAURICE GREENBERG, THE FORMER BOSS of American International Group Inc., an insurance mega-company, has expressed interest in buying the New York Times Company, according to a report from CNBC.

FacebookTweetPinLinkedIn
Category: Uncategorized
Previous Post:NBC Has No Plans to Be Portal or Ad Agency
Next Post:Sirius plans to offer TV service in cars by 2007