Years ago, when filmmakers wanted aerial shots, they needed a helicopter and a cameraman that was not afraid of heights. This meant additional expenses for renting the helicopter. And of course, it never came cheap.

But, then came the drones! In the beginning, this was mostly a hobby and the drones people made were not as stable and reliable as a helicopter. Not to mention the fact that cameras back then were huge and heavy. Basically, the thought of using a drone for aerial filming wasn’t even considered.

Luckily, as technology evolved, so did the drones and the cameras. Today we have cameras that are capable of delivering 4K resolution footage with less than 100 grams of weight! The drones are much more reliable nowadays and more than capable of carrying action cameras and even DSLR cameras. You don’t even need a full crew to produce breathtaking aerial footage with a camera drone. And you can even program the drone to do the most of the work while you sit back and enjoy the show. What new technologies are allowing the drones to be so versatile nowadays? Interested in finding out? Keep reading.

01) The High-Tech Inside the Camera Drone Itself

Drones are now much more sophisticated flying machines that they were in the beginning. Now they have a plethora of systems that keep them stable. It almost feels like they are running on invisible tracks in the air. Camera drones are controlled by GPS, a compass, a barometer, and all these things make the flight more stable than ever. Attaching a camera to the drone seemed like the next logical step in their evolution.

Furthermore, the modern flight controllers of the drones allow you to, for example, select a Point of Interest (POI) and let the drone keep following the desired object or subject, on its own, while keeping it perfectly positioned in the frame. Also, they can orbit around whatever you choose, fly in front of it as it moves, follow it, and many more interesting things that make aerial filming easier than ever.

Another important thing to mention is that with the evolution of drones, their lifting capacity significantly increased. We now have drones that have 6 or 8 rotors, and can easily lift a DSLR camera in the air and fly with it for even an hour.

When GoPro‘s action camera appeared on the market, the way people film videos, commercial ads, and in some cases even movies, changed forever. Never before could you get such quality of the video and that resolution with a camera that has such a small lens and is the size of a matchbox. It was only a matter of days before someone came up with the idea to attach a GoPro to a drone, and the camera drones were born.

Nowadays, you can buy action cameras that are cheaper than the GoPro but still deliver the nearly identical quality of the footage. Furthermore, many drone manufacturers teamed up with some major camera companies and sell their drones with an already installed camera so that you get the full filming package right from the start.

It is pretty easy to attach action cameras on your camera drones. But, you need to know that these flying machines produce plenty of vibration and that they are not leveled all the time. This means that if you simply attach a camera on the drone and start shooting, your footage will be out of focus and will have that infamous jello effect, caused by rotor vibration. Therefore, a stabilization system had to be invented. Now, with the help of a gimbal, you have footage that is smooth and crystal clear all the time. 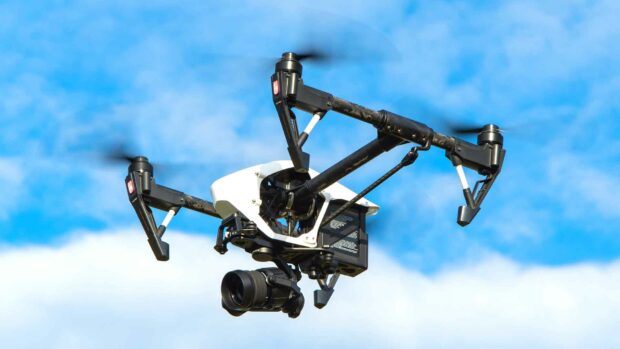 A Gimbal works together with the drone’s flight controller, especially the gyroscope, and uses its own motors to keep your camera level. This makes sure that your footage is free of the jello effect. Furthermore, it also allows you to tilt your camera up or down, or rotate left or right during the flight, which opens up a bunch of new possibilities when it comes to aerial filming.

No matter how good a drone’s camera is, when in the air, pointing at the sun, the quality of your footage is nearly useless. Also, if you are flying on a cloudy day, the colors will be all lifeless and not appealing to the eye. But, even if you manage to get all the factors perfect, your footage will not look like in the, for example, DJI’s commercial videos.

So, what’s the trick? Many would say post-production. Okay, we agree. But, if you have footage that has sun glares, or lifeless colors, even the editing programs can’t help. The actual solution that we are talking about, are camera filters. They existed long before drones were invented. But small lens filters are now ideal on the market. This way, neither the sun nor the cloudy day can ruin your footage. And the colors will actually look more vivid and prettier for the eye, even when all the conditions are perfect.

Being able to see where your camera drone flies and what footage it records is a major advantage when you want to create breathtaking videos from the air. Not only that FPV (First Person View) goggles are more practical than the monitors or smartphones. They eliminate the glare effect.

And depending on the model and the drone, you can even use them to control your camera during the flight. This option is called Head Tracking. It allows you to control the gimbal on your drone by simply moving your head in the desired direction. This makes filming much easier. But flying the drone and moving the camera at the same time is complicated. You can end up smashing the drone. Therefore, if you want to take full advantage of this feature, I suggest having another person for flying the drone while you concentrate on filming.

The new era of technology definitely brought many new interesting and useful gadgets. But camera drones, in my opinion, definitely top the list because of their usefulness. Not only that, you can have hours of fun with them. There’s even a new sport called FPV drone racing. Drones can be used for numerous useful things like filming, aerial mapping, surveillance, roof inspections, delivery, and so on.

Who knows how much camera drones will evolve in the future. But even if they don’t (which is highly unlikely!), today’s models are already so useful. They are also getting cheaper. If you want some tips on picking out some camera drones, feel free to leave a comment in the comments section. I will help you out!

Pour yourself the perfect White Russian cocktail because the Dude abides. We’ve got some of the best Big Lebowski quotes for your enjoyment.