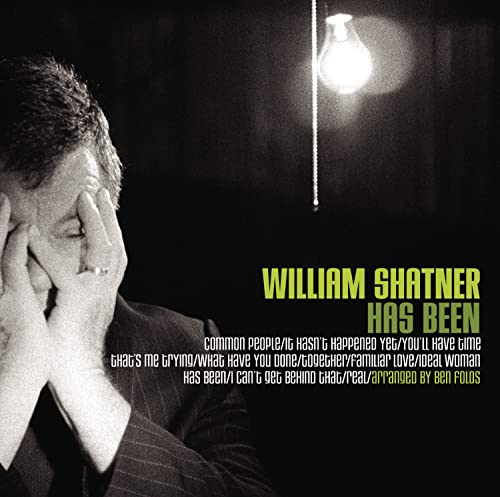 William Shatner, aka Captain Kirk from Star Trek, is famous for many things from acting to writing novels. But should we add musician to that list?

William Shatner’s new album, HAS BEEN, is a cross between electronic lounge music and spoken word resulting in an album unlike anything you’ve probably ever heard before. HAS BEEN was produced by Ben Folds, from Ben Folds Five, and features a ton of celebrity guest appearances including country star Brad Paisley, Henry Rollins, Jon Auer, Adrian Belew, Matt Chamberlain, Lemon Jelly, Aimee Mann, Joe Jackson and Sebastian Steinberg.

The first track, “Common People”, features Joe Jackson and is fantastic. I just checked in the iTunes Music Store and “Common People” is the top downloaded track off HAS BEEN. In the song, Shatner tells a story of a rich girl slumming, who is incapable of ever understanding what it means to be poor. The song “Has Been” from which the album gets its name, is a typical sad country song dismissing the critics of the world. “I Can’t Get Behind That” is a classic Shatner style over-the-top rant duet with punk legend Henry Rollins. Has there ever been a rant duet before? “Ideal Woman” is an amusing series of backhanded compliments directed a woman. The album’s closer “Real”, written by country singer Brad Paisley, ends the album with a little bit of tough love. Listen up Star Trek fans, he’s not Captain Kirk. William Shatner is just an actor.

Although Shatner is primarily known as an actor, the music industry isn’t exactly uncharted territory for him. He’s released two album before titled Spaced Out and Transformed Man. Both of which are campy novelty records and while they might have been “serious” music releases, they probably should have been classified under comedy. But if hearing Leonard Nimoy and William Shatner sings such tracks as “Highly Illogical”, “If I Was a Carpenter” and “Lucy in the Sky With Diamonds” is your thing, then you should definitely check out Spaced Out.

HAS BEEN is not just a campy novelty record. It’s actually decent music. Regardless, this album will provide you with endless amusement for many days to come! HAS BEEN is available in store everywhere October 5, 2004.
Related Articles: