If you’re a fan of the band Nirvana, get ready to throw up. Courtney Love, widow of Nirvana frontman Kurt Cobain, just approved a deal with Converse sneakers that will cash in on her late husbands legacy.

Converse plans on making an entire line of sneakers that “pay tribute to” the grunge icon, who committed suicide in 1994.

The Cobain collection will come in multiple styles and feature scribbles and lyrics taken from his personal notebooks. Lyrics from popular Nirvana songs like “Come As You Are” are specifically mentioned.

“[Nirvana] are the renegades of sound, the league-changers, champions of underachievement, the paint drippers and those with flawless style,” Scott Patt, Converse Global Footwear’s creative director, touted in a Converse.com press release last Friday.

As much as everyone hates Courtney Love (she’s the Yoko Ono of grunge), she at least had the decency to turn down a tacky Doc Martin print ad that would have featured Kurt Cobain wearing modeling Doc Marten boots in heaven. [*vomit*] 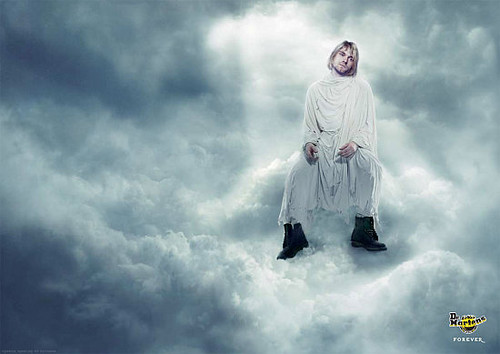 Sneakers from The Converse Cobain Line will cost you between $50-$65 and your dignity. What’s next? Kurt Cobain inspired urns?

In related news, Kurt Cobain’s ashes were stolen from Love’s home several hours after the Converse announcement. Seriously. We’re not kidding. Here’s a link to the news report.