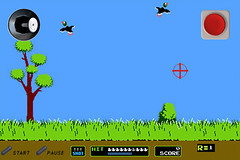 If you grew up during the 1980s, then perhaps you might remember playing an 8-bit shooter called Duck Hunt. Released for the Nintendo Entertainment System in 1985, Duck Hunt was one of the first games to use the “NES Zapper” or light gun.

Finding a working NES, light gun and original Duck Hunt cartridge 25 years later can be a little tricky and require some time searching around on eBay. But if you’re looking for a quick Duck Hunt fix, you can play an online version of Duck Hunt here, or buy an iPhone version from the iTunes Store. 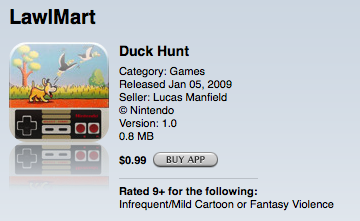 A lawyer from Nintendo will probably pull the game from the iTunes App Store before the end of the month. And don’t expect Nintendo to make an iPhone version of Duck Hunt anytime soon. Remember, Nintendo has their own portable gaming system, the Nintendo DS.

So if you really want to play Duck Hunt on your iPhone, buy it soon. The unofficial version of Duck Hunt sells for $0.99 in the iTunes App Store.

FacebookTweetPinLinkedIn
Category: Games Tag: Duck Hunt, iPhone, Nintendo
Previous Post:Google Ends Sale of Ads in Papers After 2 Years
Next Post:Why CES is More Like the Olympics and Obama than a Geekfest