You are here: Home / Learn / Business / Advertising / How Facebook Pitched Advertisers in 2004 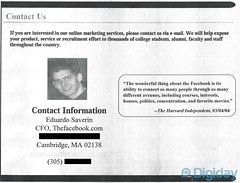 If you saw “The Social Network”, the movie that tells the story of how Facebook began, then you’ll get a thrill out of seeing these slides. As depicted in the film, Eduardo Saverin flew to New York City to sell ads right after the launch of TheFacebook.com in the spring of 2004. A copy of his Microsoft PowerPoint presentation was obtained by Digiday from a New York-based marketer who saved it.

It’s funny to see a sales presentation pitching an audience of “thousands” of users considering Facebook has over a billion users right now.

What do you think? Would you have bought ads from The Facebook back in 2004?

Current TV Joins Pinterest – What Took Them So Long?
Next Post: So my mom pretty much bought a $800 Bejeweled machine