There were actually quite a few great commercials that aired during Super Bowl XLIII. Thanks to Hulu.com, we’ve collected some of our favorites and posted them here for you to check out. I personally got a good chuckle over Conan O’Brien’s Swedish Bud Light commercial. The Doritos Crystal Ball commercial was also pretty good as was Jason Statham’s Audi ad. The twist on the new Coke Zero ad (the remake of the old Mean Joe Greene Coca Cola ad) actually turned out to be worth the hype and we got a good laugh at the Cash4Gold.com commercial. Hulu’s doing a poll where you can vote for your favorite ad. Check it out or post a comment below with your favorite commercial from Super Bowl XLIII.

First, let’s give it up for Hulu, not only for updating their site every ten minutes with the latest ads as the Super Bowl aired but also for this hilarious commercial that ran during tonight’s game: 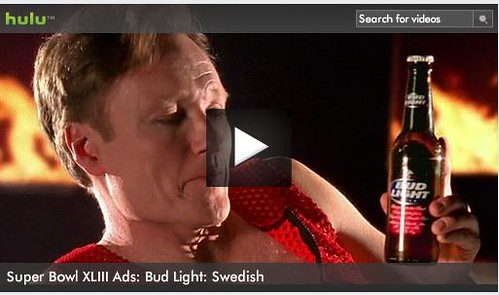 [Check it Out: cinemablend]