It works with a remote control. It's a "lean back experience.\" But Hulu says its new downloadable application that looks like a TV interface still isn't intended to be watched on a TV.

May 29, 2009 by Melissa Kondak
FacebookTweetPinLinkedIn 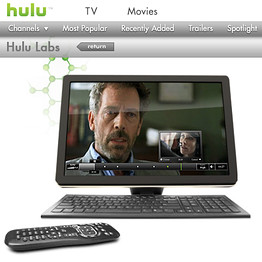 It works with a remote control. It’s a “lean back experience.” But Hulu says its new downloadable application that looks like a TV interface still isn’t intended to be watched on a TV.

The new Hulu Desktop, which the company began offering for download on Thursday, isn’t made to work with set-top boxes — like Apple TV — that would make porting it to TV a simple matter, the company says. Rather, “it’s a natural extension of Hulu innovating in the PC environment,” Christina Lee, a Hulu spokeswoman, said Thursday.

That narrow distinction could be worth billions of dollars to the media companies that own Hulu, including General Electric’s NBC Universal, News Corp. and soon Walt Disney (News Corp. also owns Dow Jones, publisher of The Wall Street Journal).

Cable-TV operators have expressed concern that the wide availability of Web video could discourage people from subscribing to pay-TV services — something that could undermine the billions in monthly fees that have helped U.S. cable networks underwrite a flowering of TV shows in recent decades from “Mad Men” to “Jon & Kate Plus 8.”

To avoid that fate, Time Warner Cable and Comcast, the two largest operators in the U.S. by subscribers, are working on systems that would make more full episodes of cable shows available online, but only to paying subscribers. By keeping Hulu from being widely viewed on TV, Hulu’s media-giant owners may mollify the operators, even as their executives say publicly they’d resist putting TV shows that are currently free to watch online behind such a subscription wall.

That reluctance to push Hulu to televisions is also at the heart of Hulu’s months-long skirmish with upstart software company Boxee, which offers a similar application that covers a variety of Web-video aggregators with a key difference: It works with boxes like Apple TV.

In February, Hulu pulled its content from Boxee, after a request from its “content providers,” according to a blog post from Hulu CEO Jason Kilar. Boxee engineers restored the feed, only to have it pulled again, and so on. Hulu maintains that Boxee doesn’t have the right to put Hulu content within its interface.

Boxee was quick to respond to Hulu Desktop on its blog, writing that it’s “glad to see Hulu had a change of heart about bringing their service to the big screen,” and adding that “we’ve already put in a request to Hulu to work with them on bringing Hulu back to boxee.”

But that request is likely to be a nonstarter. Asked Thursday about why Hulu resists being streamed to TVs during an interview at All Things D, NBC Universal CEO Jeff Zucker said Hulu is “committed to being an online experience,” adding that he thinks that will continue.