On Thursday afternoon, US markets looked in danger of staging a repeat of the previous day’s plunge, when Charles Gasparino, CNBC’s on-air editor, appeared on screen with a story that the US Treasury was planning to take over the toxic debts that had triggered the crisis rocking Wall Street.

In the hour before US trading ended, no word came from the Treasury, but the Dow Jones Industrial Average rose almost 3 per cent.

In an age when online bloggers are supposed to have increasing sway over the news agenda, the credit crisis has instead seen Wall Street and City traders and executives glued to cable television.

A string of exclusives from CNBC has included interviews with Barack Obama and John McCain, arranged hastily as both candidates saw the economy dominate the presidential campaign.

CNBC’s screens, which at times featured eight talking heads all trying to be heard at once, also captured the confusion of the week.

On Tuesday last week, after Mr Gasparino reported that federal money was “on the table” for American International Group, his colleague David Faber went on air saying that a private sector solution had failed but he could not confirm the bail-out report. AIG’s shares see-sawed wildly on the day. Similarly, CNBC at first reported that China’s Citic Group – rather than China Investment Corp, or CIC – might invest in Morgan Stanley.

Such stories have highlighted the role and responsibilities of real-time news outlets during a period of intense market volatility, while turning a darkening economic story that could raise questions about the outlook for NBC Universal’s financial channel into an opportunity. According to Mark Hoffman, president of CNBC, the network has done more than be in the right place during the biggest financial story for decades.

“This is an ongoing situation that plays out in real time, and our whole strategy has been focused around real time,” he told the Financial Times in CNBC’s studio complex in New Jersey.

CNBC’s US daily audience in business hours shot up from 288,000 in the week before Lehman Brothers collapsed to 500,000 last week, according to Nielsen, the marketing information group. CNBC.com also saw record traffic, recording 15m page views a day last week, more than double its previous highs. Viewers are being drawn by CNBC’s exclusives, Mr Hoffman says, but he resists criticisms that these may have contributed to the febrile climate.

In August, Vanity Fair named “trigger-happy reporters” as participants in the collapse of Bear Stearns. Mr Hoffman will not comment on the report. Mr Gasparino, however, told the New York Post: “In those critical hours we were reporting what was happening in the markets. What are we going to do? Ignore it?”

According to Mr Hoffman: “We understand our responsibility and we always take a breath [before putting out market-moving news].”

CNBC is uniquely placed to present complex material in real time, he says, because of its experienced reporters, and its strategy of “going narrow and deep” to focus on investors rather than a general audience.

He will not comment on how competitors are faring – Bloomberg Television and the 11-month-old Fox Business Network have also seen higher audiences but neither are rated by Nielsen – but says he is confident in CNBC’s business model despite financial advertising’s suffering elsewhere.

“We’ve seen nothing out of the ordinary” in terms of falling advertising volumes or pricing, he says. “No one can say the last 13 months have been a boom period for domestic equity markets, [but] in that environment CNBC has continued to grow.” 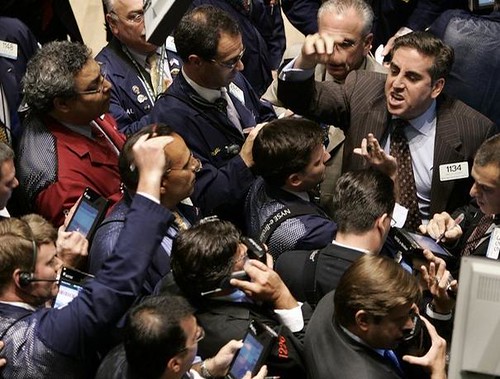