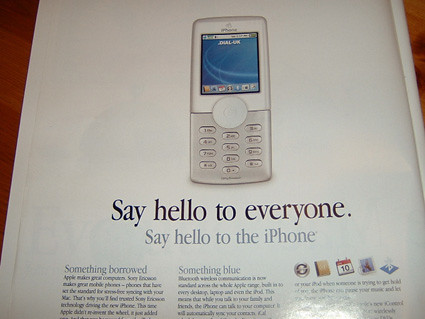 Is Apple working on a new combination mp3 player and cell phone called the iPhone? Apple’s CFO, Peter Oppenheimer, might have let the ‘cat out of the bag‘ on an Apple analyst Q3 conference call.

When Merrill Lynch analyst Richard Farmer mentioned the success of the Sony Walkman Phone, Oppenheimer responded by saying: “As regards cell phones, we don’t think that the phones that are available today make the best music players. We think the iPod is. But over time, that is likely to change. And [Apple is] not sitting around doing nothing.” When you combine this information with all the “iPhone” rumors already buzzing around the Internet, it leaves little doubt that Apple is indeed working on a phone product probably called an iPhone.

In addition to Oppenheimer’s slip of the tongue on the conference call, VL-Tone, a member of the Apple Insider forums found some interesting code in the last iPod software update. When using a hex editor he found several phone related commands/variables in the update including:

As a result of all this iPhone hype and rumors, Merrill Lynch has upgraded Apple stock (AAPL) to a ‘buy’ and raised the target price to $72.

So when it comes to cell phones, just remember that Apple is “not sitting around doing nothing. This should serve as a clear indication that Apple is indeed working on the iPhone. It is now a matter of when Apple will officially confirm the project and even release a timeframe for the device.
Related Articles: