If you can’t wait to see it on TV, Apple has posted a commercial for the new iPod Shuffle on Apple.com. The commercial features the song “Jerk It Out” by The Caesars and black silhouette dancers on a solid green background. 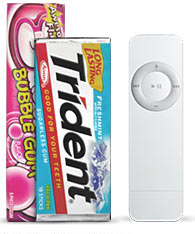 OTHER THINGS YOU SHOULD KNOW
Despite its name, the iPod Shuffle does not force you to listen to your tunes in random order. Using the iTunes software on your computer, it’s easy to create a playlist or download specific songs you choose to your iPod Shuffle, and then listen to them in order.

If you’re not familiar with the iTunes software, it is very well-designed and easy to use. iTunes is also the portal to Apple’s website that sells music downloads, but the iTunes software does NOT push you to visit the store or buy anything.

There are two ways to charge the iPod Shuffle‘s battery – you can plug it into your computer’s USB port, or you can use an external adapter, which is not included in the price. So if you plan on taking your iPod Shuffle on a trip, but won’t have a computer, then you’ll probably need to factor the cost of the adapter into your purchase decision. Or you could just make a visit to the local electronics store and plug it into a display computer with a USB port. If you are desperate, you could even ask someone at your hotel’s front desk to plug it into their computer for a quick charge.

After spending a little time with an iPod Shuffle, you will adapt to the lack of display and really not really miss it. The simplicity of the iPod Shuffle is even more appreciated when compared to other MP3 players. Competitors like iRiver offer extra features in their products, but accessing many of these features is very awkward, especially if you don’t use them very much.